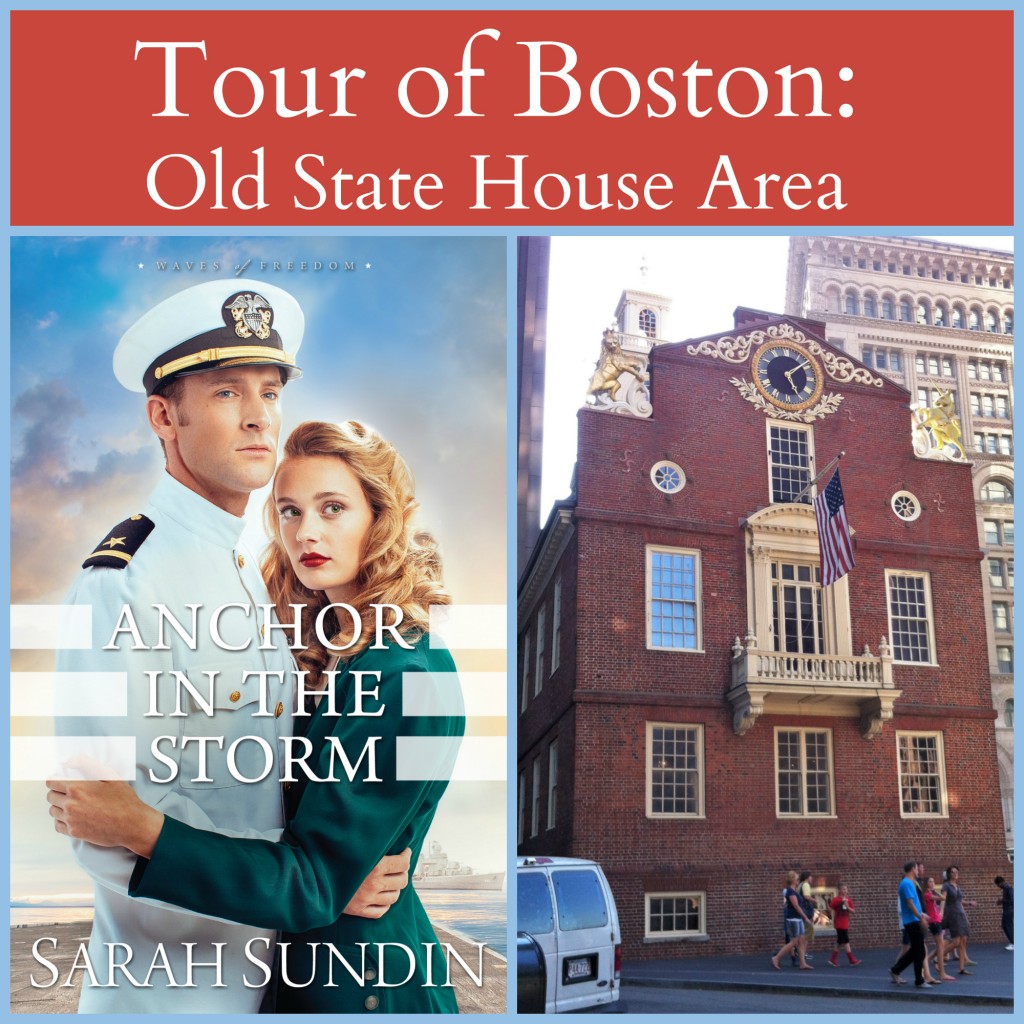 Anchor in the Storm is coming soon! The second book in the Waves of Freedom series officially releases on May 3, 2016, but it’s already available at many locations.

To celebrate, I’m giving away THREE copies of Anchor in the Storm and an adorable vintage Through Waters Deep apron, crafted by my talented author sister, Marci Seither – her daughter Amy is the lovely apron model! To enter, leave a comment below (US & Canada only please), and/or on yesterday’s Tour of Boston post, which shows many of the sites mentioned in the novel. You can earn a maximum of two entries by leaving a comment on both posts. If you can’t leave a comment, please send me an email to enter. Giveaway ends Sunday, May 1, 2016 at 10 pm, Pacific Time. I’ll announce the winner here on Monday, May 2, 2016.

The city of Boston is fascinating—chockfull of history and color. While best known for its key role in the American Revolution, the city also played a role in World War II, with busy shipyards and naval bases—and more! The city’s reputation for revolutionary foment and its naval heritage set a great backdrop for Anchor in the Storm, set in the tumult of 1942, as the nation reeled from the news of Pearl Harbor—and from the U-boat war raging off the East Coast.

I’ve been blessed to visit Boston a number of times. In July 2014, I made a research trip and took lots of pictures to help me visualize the story. We’ll follow the Freedom Trail, established in the 1950s to connect Boston’s multiple historical sites.

Built in 1713, the Old State House served as the seat of Massachusetts’s colonial government, and was the tallest building in Boston until Old North Church erected its steeple and bell tower in 1745. In 1768 at the Old State House, the House of Representatives called on the colonists to resist British taxation. In 1776, the Declaration of Independence was first read to Bostonians from the balcony of the building, which then became the seat of the new government of the Commonwealth of Massachusetts.

In 1798, the current State House was completed. The Old State House was used for various purposes and served as City Hall from 1830-41. In 1904, a subway station was built in the basement and operates to this day. 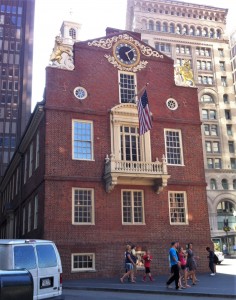 Right in front of the Old State House is the site of the Boston Massacre. On March 5, 1770, a clash between a British guard and a Bostonian escalated. Soon a mob of colonists threw snowballs and rocks at the soldiers…and then the Redcoats opened fire. Five colonists died from their wounds, including fugitive slave Crispus Attucks. The Sons of Liberty, including Paul Revere and Samuel Adams, used the incident to bolster their case for revolution. 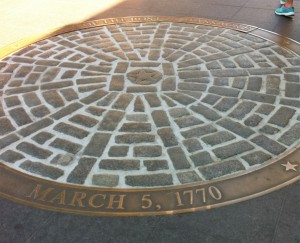 Turning north on Congress Street, you’ll see Faneuil Hall. Built as a center for commerce in 1742, it also served as the site for the first town meeting in America. To this day, markets fill the first floor, while a meeting hall occupies the second floor. In this meeting hall, the Sons of Liberty protested Royal actions, such as the Sugar Act, the Stamp Act, the Tea Act, and the occupation of the city by British soldiers. 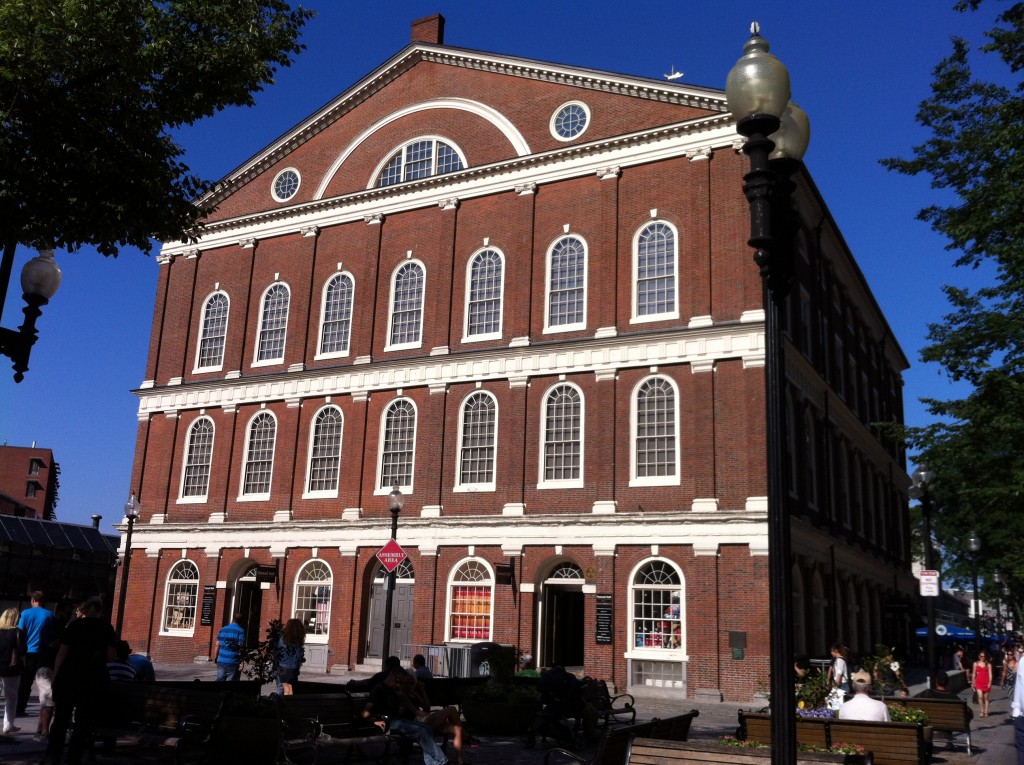 In 1824-26, Quincy Market was built next to Faneuil Hall to extend the marketspace. Today both buildings have an eclectic mix of food and products appealing both to locals and tourists. 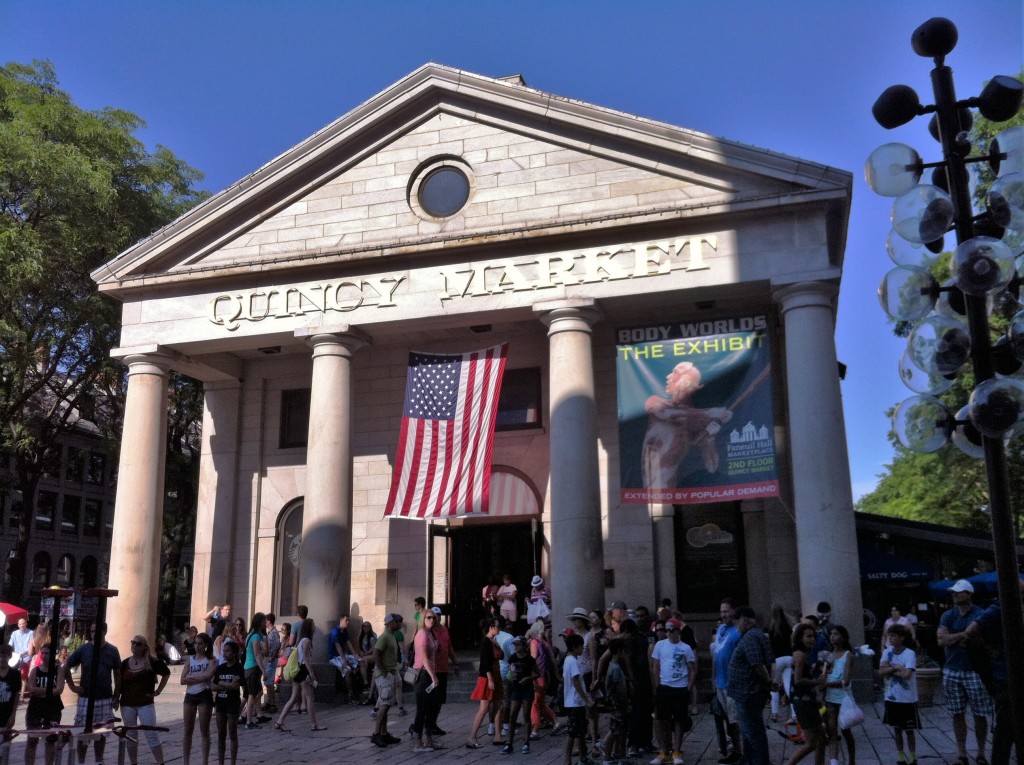 In 1742, a restaurant was started in a warehouse next to Faneuil Hall. Very popular, it was purchased in 1827 by John Durgin and Eldridge Park, who established Durgin-Park Restaurant. A Boston favorite for almost three hundred years, the restaurant is famous for its long tables designed to be shared, by excellent New England fare…and for the temperament of its wait staff. Traditionally, the waitresses were “surly,” even rude, but according to the restaurant’s website, the current owners have “toned down the waitresses to sassy.” When we visited, we found the service quite pleasant—and the baked beans, pot pie, and Boston Cream Pie?—heavenly.

NOTE: If you’d like to see my recipe for Boston Cream Pie – and a fun video – come to Marci Seither’s blog (yes, my apron-making author buddy. I told you she was talented). 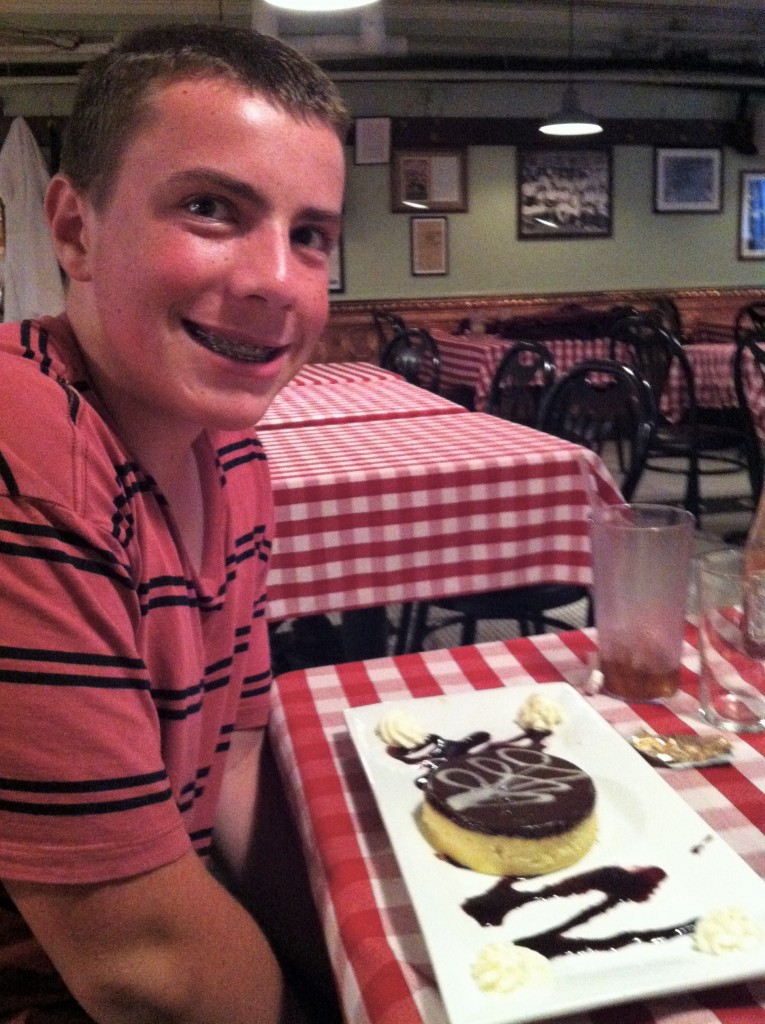 Just a block south of Quincy Market stands the Custom House. Boston has had a custom house on the waterfront since colonial times. The current building was completed in 1949, and in 1915 the tower was built. Boston’s first skyscraper, the Custom House was the tallest building in the city until 1964. The customs office moved out in 1987, and since 1997 the building has housed a time-share resort. 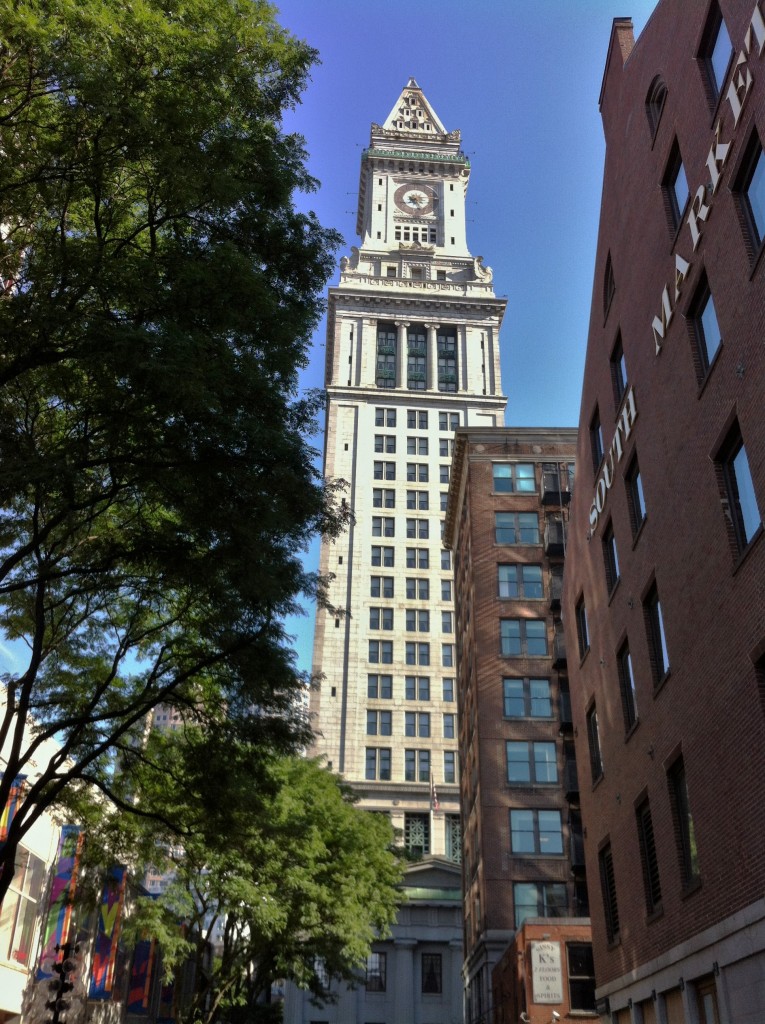 I hope you enjoyed your tour!

51 Responses to “Anchor in the Storm – Tour of Boston, Old State House Area – and Giveaway!”