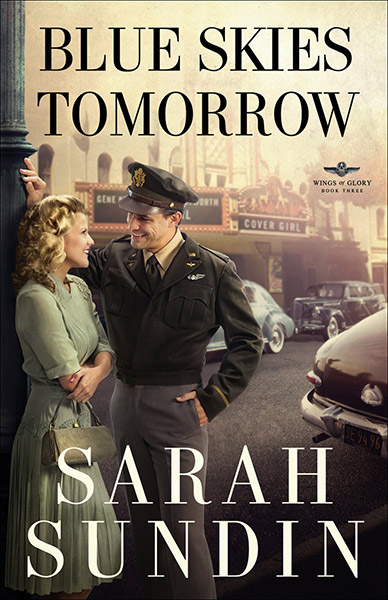 Here it is! The cover for Blue Skies Tomorrow, coming from Revell, August 2011!

And here’s the blurb from the publisher…

Lt. Raymond Novak prefers the pulpit to the cockpit, but at least his stateside job training B-17 pilots allows him the luxury of a personal life. As he courts Helen Carlisle, a young war widow and mother who conceals her pain under a frenzy of volunteer work, the sparks of their romance set a fire that flings them both into peril. After Ray leaves to fly a combat mission at the peak of the air war over Europe, Helen takes a job in a dangerous munitions yard and confronts an even graver menace in her own home. Will they find the courage to face their challenges? And can their young love survive until blue skies return?

Blue Skies Tomorrow is the third book in the Wings of Glory series, which follows the three Novak brothers, B-17 bomber pilots with the US Eighth Air Force stationed in England during World War II. Each book stands alone.

I love all the little details in this cover! The building in the background is El Campanil Theater in Antioch, California, where several scenes in the book take place. This building was built in 1928 and has been gorgeously restored by a non-profit organization and hosts all sorts of interesting musical groups, plays, and classic movies. If you’re ever in town, drop by! To see pictures or to see upcoming attractions, please visit http://www.elcampaniltheatre.com (Yes, it’s “theatre” in the website address).

Another great little detail is the movie on the marquee. Cover Girl, starring Gene Kelly and Rita Hayworth, featured orchestration by Carmen Dragon, a native of Antioch, California. Mr. Dragon won the 1944 Oscar for his work on the film.

So…what do you think?

14 responses to “Blue Skies Tomorrow – the Book Cover is Here!”