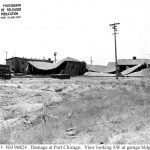 In the worst Home Front disaster of World War II, an explosion at the Naval Magazine in Port Chicago, California on July 17, 1944 killed 320 men, of whom 202 were black. The tragedy was followed by a work stoppage and a controversial mutiny trial. This sent ripples of change through the segregated armed forces…. Read more »

On Labor Day I thought it was appropriate to honor the vital role of production in the Allied victory in World War II. The United States was well situated to become the “Arsenal of Democracy.” Other than a few random bombings from Japanese submarine-based planes and shellings from submarines, America was free from damage. The… Read more »

For months, Helen had lain in the county polio ward. No matter how hard she’d concentrated, her legs wouldn’t do what she asked from them, demanded from them, pleaded from them. In my novel Blue Skies Tomorrow, which takes place during World War II, Helen Carlisle deals with many repercussions of a childhood bout with… Read more »

Sixty-six years ago, on August 14, 1945, World War II came to an end when Emperor Hirohito of Japan signed his acceptance of the Potsdam Declaration demanding unconditional surrender to the Allies. The surrender was announced in the United States at 7pm Eastern War Savings Time. The following day, August 15, was officially proclaimed V-J… Read more »

Wars are expensive. The Second World War cost the United States $300 billion dollars, with the federal budget rising from $9 billion in 1939 to $98 billion in 1945. How was the nation to pay for that? Taxes were increased with an additional 5 percent Victory Tax. To assure payment, on June 10, 1943 the government approved… Read more »

Imagine going to the store and not finding batteries, thumbtacks, alarm clocks, or paper clips on the shelves. During World War II, both metals and factories were needed for military purposes. Ships and planes and jeeps and guns and ration tins and helmets took precedence over civilian products. After the United States entered the war, factories… Read more »

Today we commemorate the 67th anniversary of the D-Day landings. On June 6, 1944, the Allies landed on the beaches of Normandy to liberate Europe from Nazi power. In August 2007, I was privileged to stand on Omaha Beach on a misty, overcast morning not unlike the men faced that historic day. As I stood… Read more » 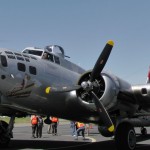 On Monday, May 2, I had the privilege of flying in a B-17 Flying Fortress. The Experimental Aircraft Association visited Buchanan Field in Concord, California with their beautifully restored B-17G, Aluminum Overcast. I’ve enjoyed walking through this plane for years and always dreamed of taking a flight. This year one of my readers, who volunteers with… Read more »

Sixty-six years ago today, the Allies celebrated Victory in Europe. People went to church and prayed. Bells rang. Parades rejoiced through small towns and cities. The cost of victory was high. Tens of millions were killed in battle. More tens of millions were murdered and starved in concentration camps. And more millions perished as civilian… Read more »