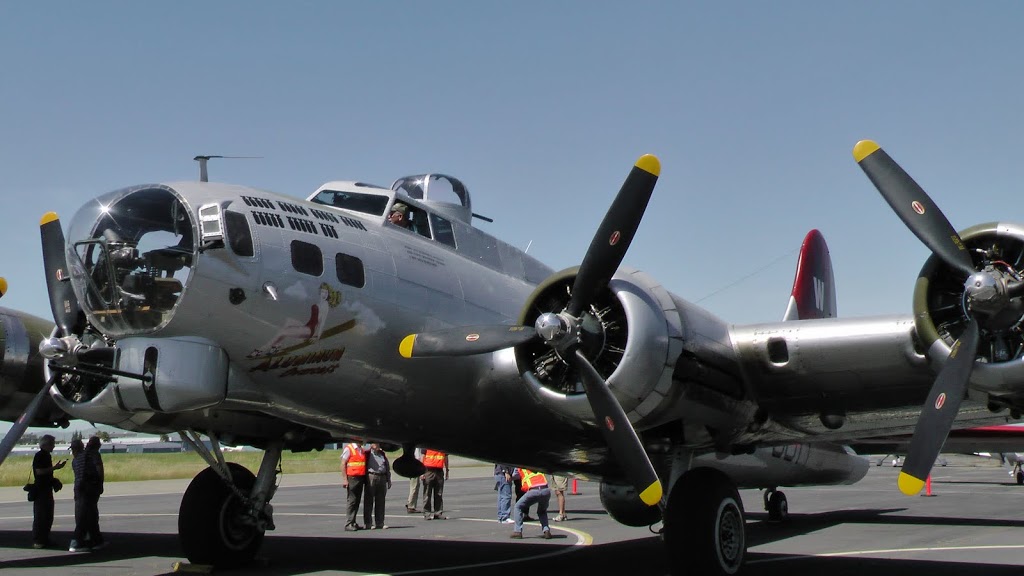 On Monday, May 2, I had the privilege of flying in a B-17 Flying Fortress. The Experimental Aircraft Association visited Buchanan Field in Concord, California with their beautifully restored B-17G, Aluminum Overcast. I’ve enjoyed walking through this plane for years and always dreamed of taking a flight. This year one of my readers, who volunteers with EAA, arranged for me to participate in the media flight.

The video below includes footage on the ground, takeoff, my rollicking tour of the plane in flight, and the landing. I hope you enjoy! Here’s the direct link if the embedded video doesn’t work: Sarah’s B-17 Video

My flight included journalists from local newspapers and news blogs, two World War II B-17 veterans, and me. After we were briefed on safety, we were strapped into military-style jump seats. I was seated in the waist compartment, toward the rear of the plane.

They started the engines, which set the plane to bumping and rocking. After the pilot taxied into position, he ran up the engines. I couldn’t hear my own voice, so I’m stunned that the camcorder continued to pick up my narration. It didn’t take long to get us airborne, and as soon as the landing gear was raised, the volunteers gave us the thumbs-up to move around – while the plane was still climbing and banking. I didn’t waste any time getting up!

Moving around the plane was challenging and not for the fainthearted. At five foot six, I had a bit of room over my head, but not much. Climbing around the ball turret apparatus and through the doors requires some maneuvering, watching what you hold onto, and giving yourself plenty of clearance so a sudden dip or turn won’t make you bonk your head. I gained even more appreciation for our airmen moving through the plane wearing full high-altitude flight gear.

I made my way from the waist compartment through the radio room and bomb bay, and into the cockpit. This particular restoration does not include the apparatus for the top turret in the back of the cockpit, leaving more room for spectators. I spectated.

Then I stepped down into the passageway between the pilots’ seats and crawled – yes, on hands and knees – into the nose compartment. The clear conical nose allowed great visibility for World War II bombardiers – and now gives the same great visibility to aviation buffs. I turned around and enjoyed watching the engines and whirling propellers from the front. As I did so, Mount Diablo came into view. Oh my goodness. For once I had the presence of mind to take a still picture.

Not wanting to hog the best seat in the house, I made my way back to the waist compartment. Only a few minutes later it was time to sit down for the descent and landing. That was one of the smoothest landings I’ve ever experienced. The WWII veteran pilot was extremely impressed and remarked that it was a crosswind landing, which is more difficult.

I am so thankful for groups like the EAA that make history come alive and commemorate the outstanding things our airmen did. The combat airmen flew long missions in unpressurized, unheated aircraft at over 25,000 feet, where the temperature often falls to forty degrees below zero. They endured antiaircraft fire and fighter attacks over enemy territory. They watched too many of their friends, promising young men, come to early deaths. One of the veterans on our flight admitted, “We were scared.” They didn’t consider themselves heroes, but they were. Despite their fear, they acted. And because of their actions, we live in freedom today.

6 Responses to “Flying in a Fortress”