During World War II, posters like these decorated storefronts, train stations, and other public places. Spies were present. An innocent conversation in the barber shop, the grocery, or a phone booth could be overheard and passed to the enemy. Information about troop movements, sailing schedules, and strength of the armed forces was especially guarded. One careless comment could lead to thousands of deaths.

Free speech is one of the cornerstones of American society, but during the war, limits were accepted in order to protect lives – and ultimately those very freedoms. Citizens understood that free speech without discretion could be harmful.

Lives may no longer be on the line, but a lack of discretion causes a new realm of problems unimagined seventy years ago. The speed of Twittering, Facebook, and blogging, coupled with the popularity of full self-expression, can lead to great hurt and damage. In the past year, I 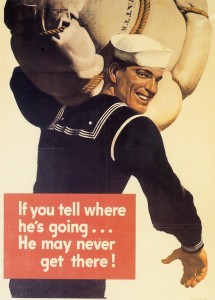 Perhaps a return to self-censorship is warranted. Before hitting “share,” if we all took a few seconds to consider the possible impact of our posts, a lot of damage could be prevented. I run through a mental checklist – would I want these people reading this post – my husband, parents, children, boss, pastor, neighbor…and the person I’m writing about (even celebrities have feelings)? I have failed. I’ve posted things I regretted and removed. But if we all tried, civility could replace anger on the Internet.

Loose lips may no longer sink ships, but they can sink families, reputations, and careers. Thoughts?