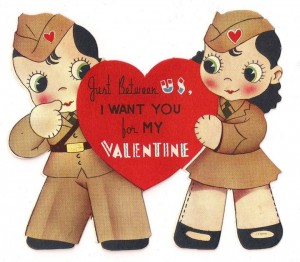 There’s nothing like a love letter. When you write one, you dwell on the qualities you adore in the person you love. When you receive one, you feel warm and gooey inside.

During World War II, letters were more than romantic—they were essential to the health of a relationship. Soldiers and sailors who shipped overseas couldn’t make phone calls, and of course, e-mails and text messages hadn’t been invented. That left letters.

The US military knew that letters from home were the single biggest morale booster, and a force with high morale fights better. However, mail bags took up valuable space on cargo ships and planes. For example, in 1945 the US Army handled over 2 billion pieces of mail.

Still Victory mail and regular letters helped couples communicate. The danger of wartime lent urgency to correspondence. No one knew if that letter was the last one they’d write or receive. Couples regularly expressed feelings usually saved for special occasions.

My source for this post was the excellent on-line display on V-Mail at the Smithsonian Postal Museum: http://www.postalmuseum.si.edu/VictoryMail

We may not face the same danger today, but our marriages can still benefit from a sweetly written love letter.