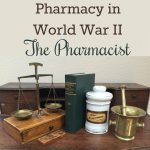 As a former pharmacist, I’ve found the history of pharmacy in World War II fascinating. So fascinating that I’ve written two novels featuring pharmacists. In On Distant Shores, pharmacist John Hutchinson serves in a pharmacy in an Army evacuation hospital in Italy, and in Anchor in the Storm, Lillian Avery works as a pharmacist in… Read more »