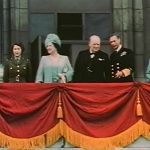 During World War II, King George VI sat on the throne of England, with Queen Elizabeth at his side—better known to modern generations as the “Queen Mum.” King George VI was crowned in Westminster Abbey on May 12, 1937, at the age of 41, after the controversial abdication of his older brother King Edward VIII…. Read more »