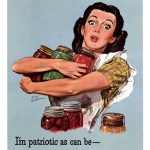 Rationing of processed foods was an important part of life on the US Home Front. A complex and constantly changing system kept the grocery shopper on her toes. Why processed foods? Tin was short. The Japanese controlled 70 percent of the world’s tin supply. Tin’s resistance to temperature, shock, and moisture made it an ideal… Read more » 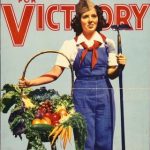 For the average American in World War II, the Victory Garden was a practical way to contribute to the war effort. Some 20 million Victory Gardens were planted (US population in 1940 was 132 million), and by 1943, these little plots produced 40 percent of all vegetables consumed in the US. It’s estimated that 9-10… Read more »