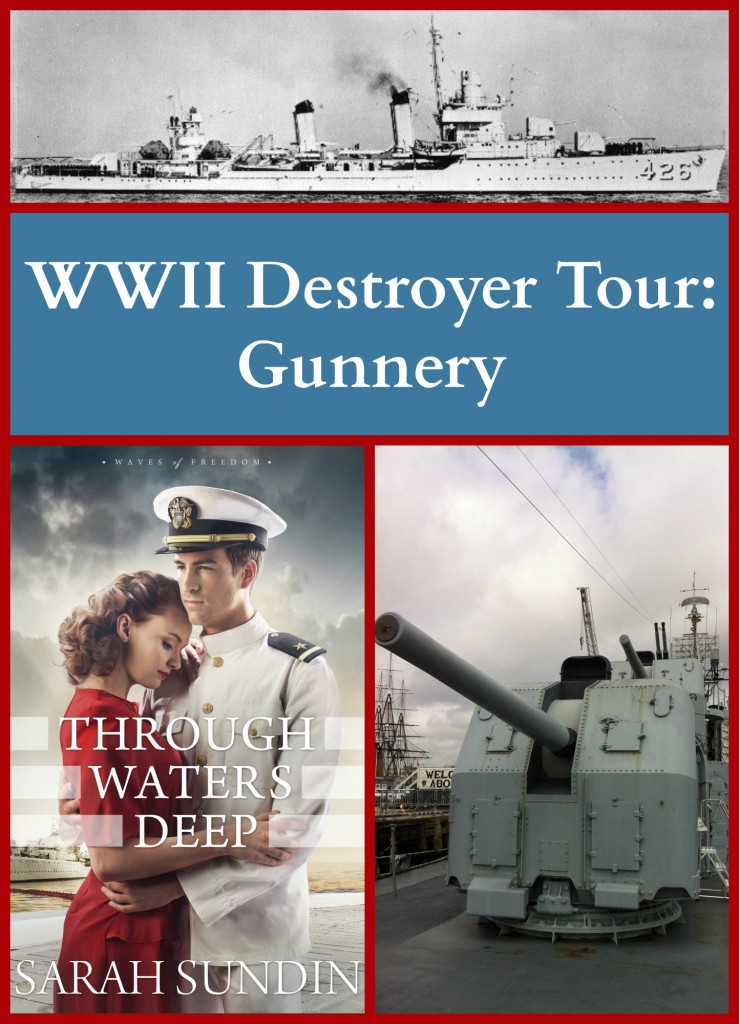 In my new novel Through Waters Deep, Ens. Jim Avery serves on a fictional Gleaves-class destroyer, the USS Atwood. While researching the Waves of Freedom series, I visited two World War II destroyers, the Fletcher-class USS Cassin Young at the Charlestown Navy Yard in Boston and the Gearing-class USS Joseph P. Kennedy, Jr. at Battleship Cove in Fall River, MA. This week I’ll share photos from my tours:

Part 1—Topside: the various destroyer classes, and a bow-to-stern tour of the main deck.

Destroyers in World War II carried weaponry to fight submarines, surface ships, and aircraft. The exact armament carried by a destroyer varied widely depending on the class of destroyer, the year, and the theater of operation. Each destroyer had several 5-inch guns (the bore is five inches wide), the largest carried on destroyers. 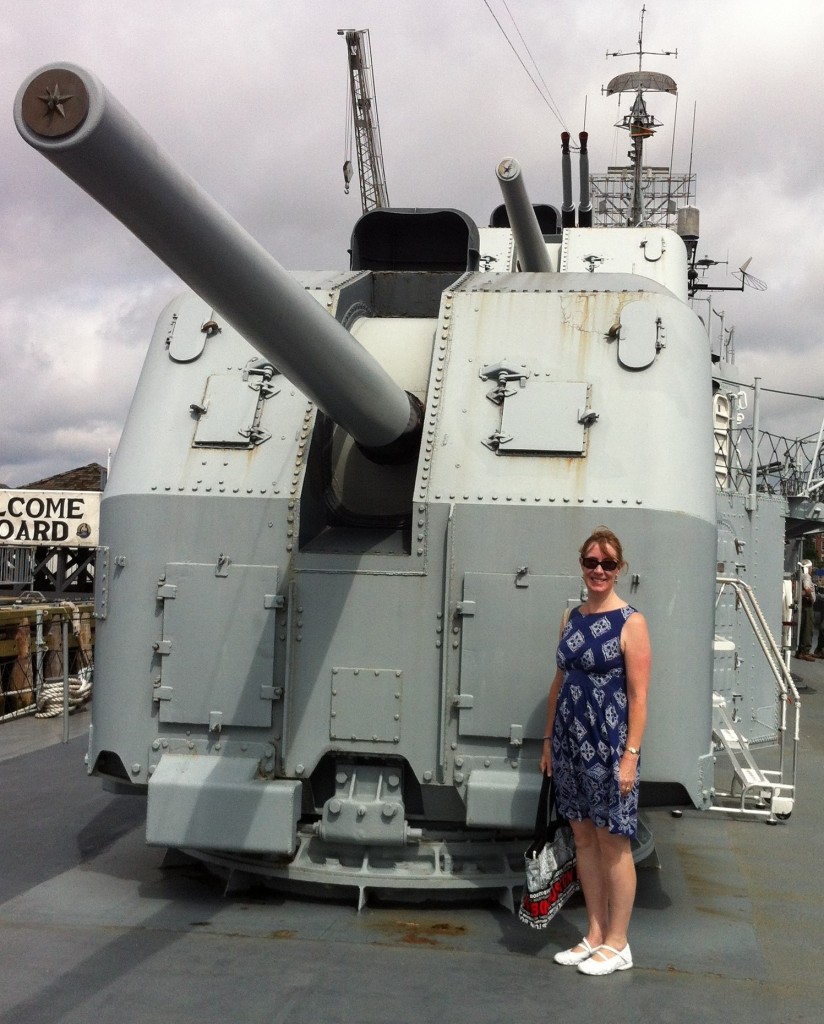 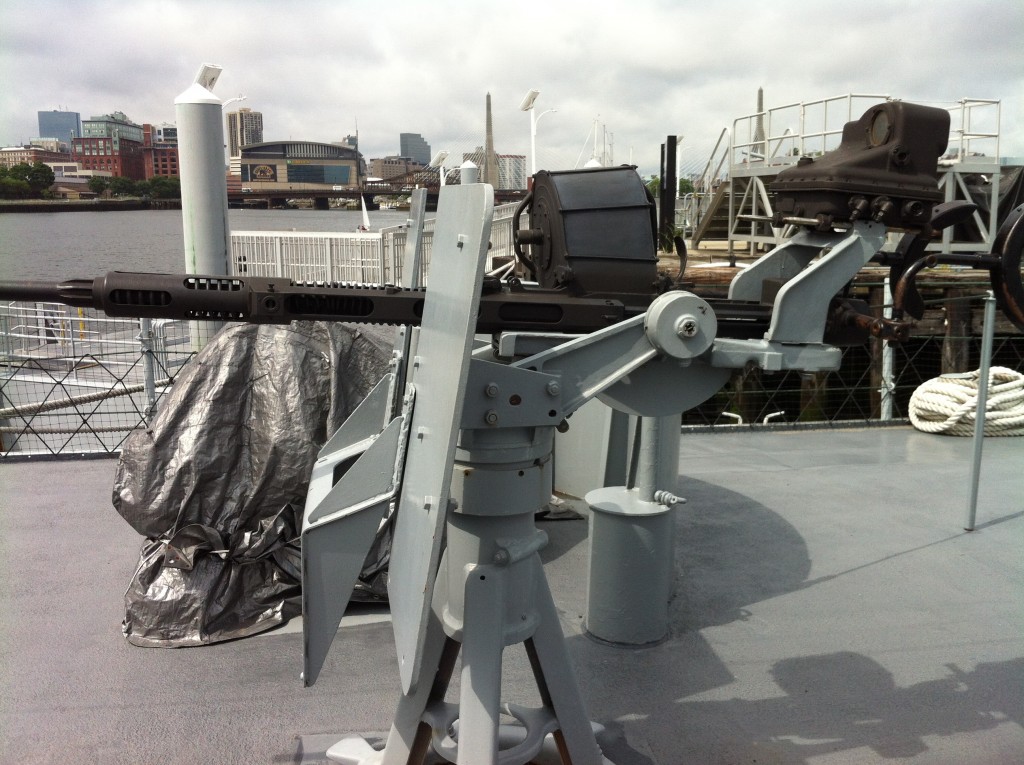 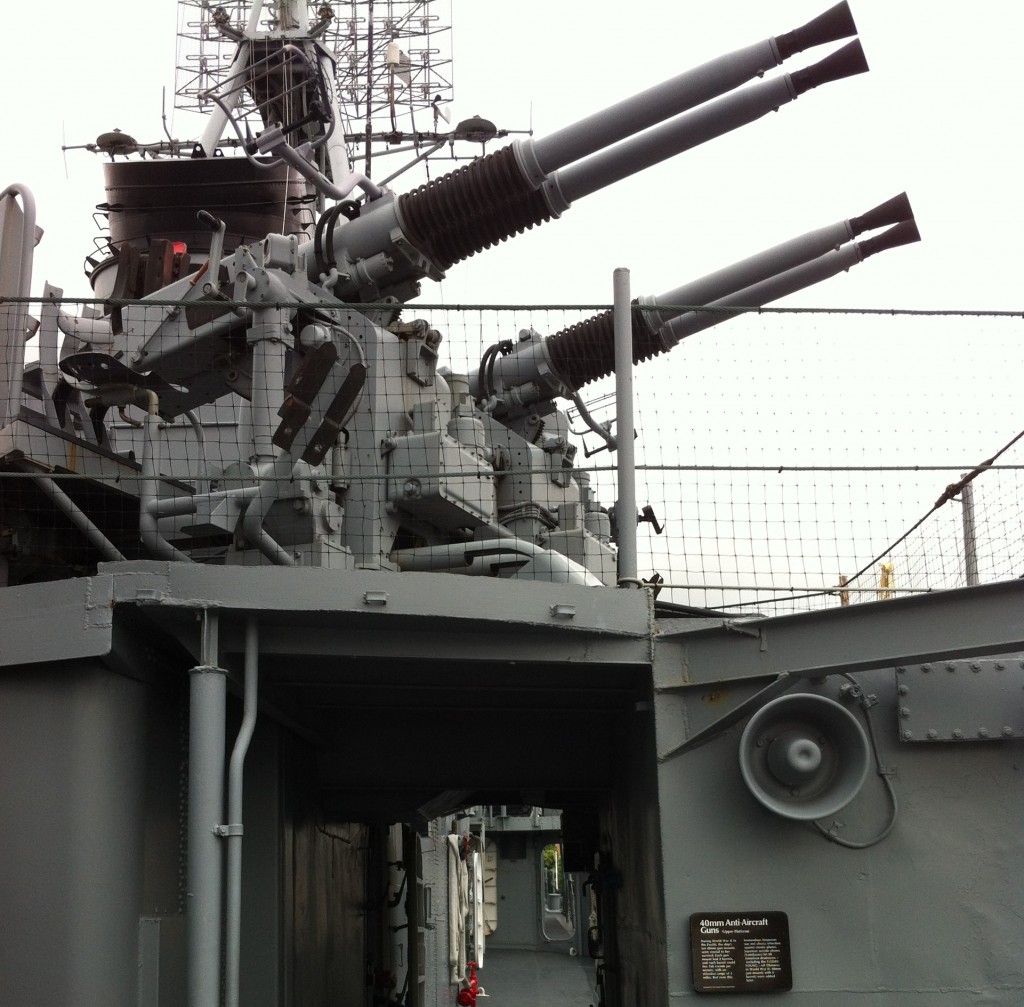 Torpedoes were fired from tubes on the deck. Depth charges were rolled from racks on the stern or fired from “K-guns” or “Y-guns” to combat submarines. 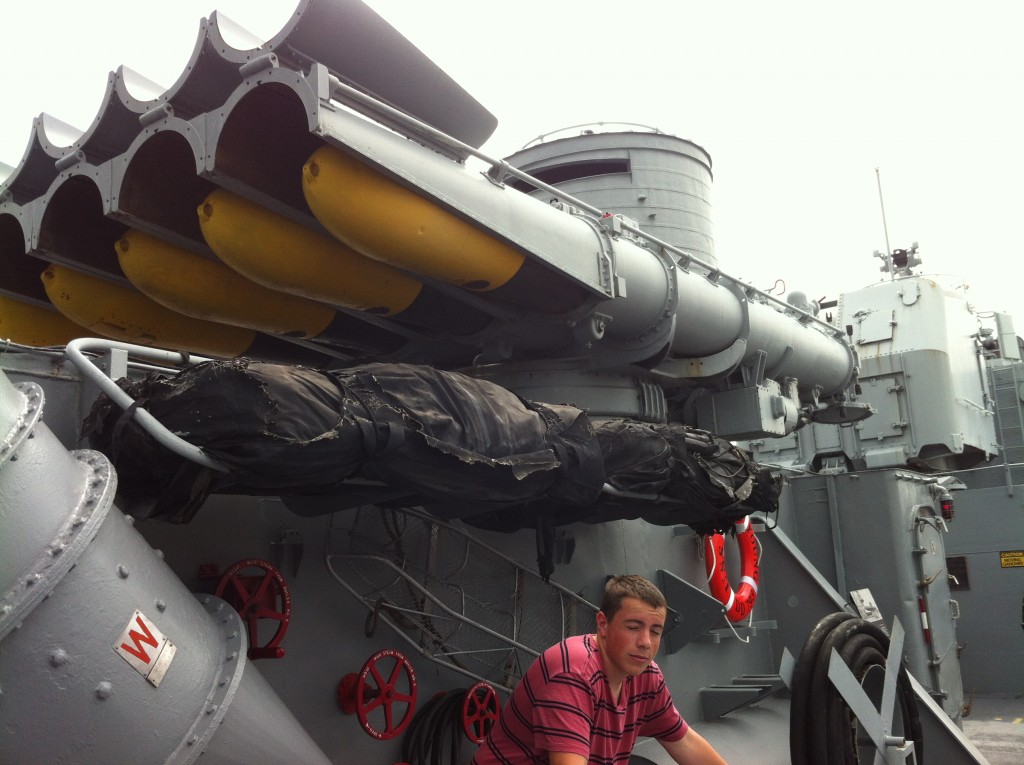 On board the battleship USS Massachusetts in Battleship Cove, Fall River, MA, I was able to climb inside a 5-inch dual mount gun. While destroyers carried single mount guns, I was still thrilled to see inside the cramped space. 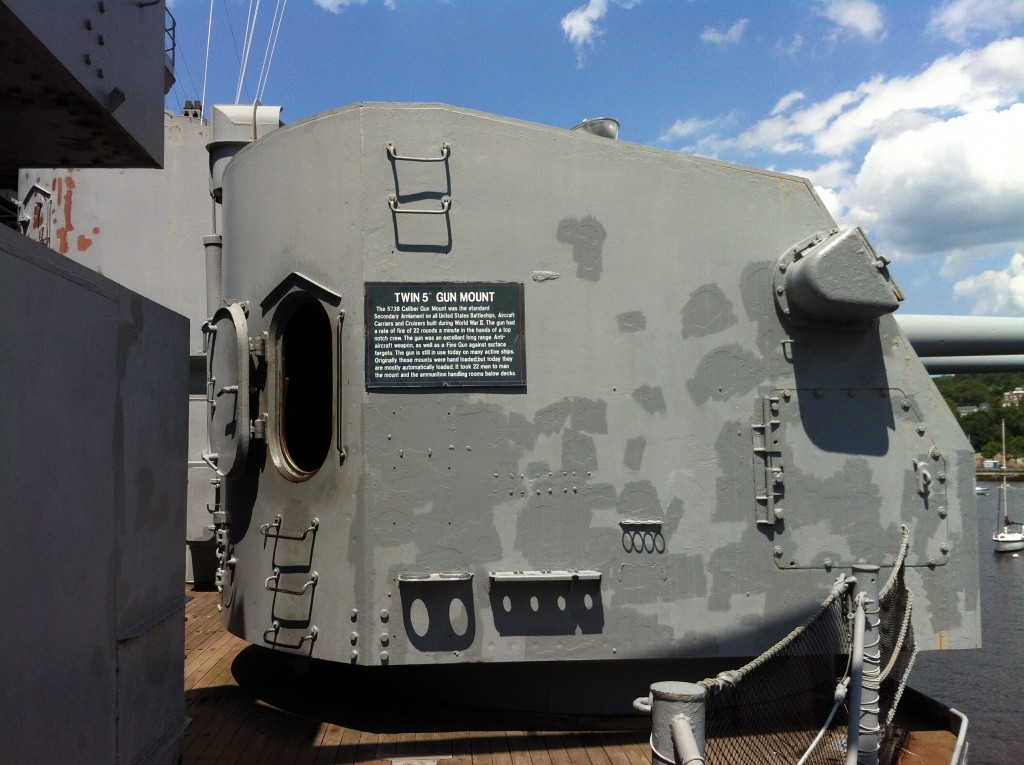 The loading tray of a gun is pictured below. The crew would load a 5-inch projectile (the explosive shell) and a powder case, close the spade, ram the ammunition into the barrel, point and train the gun, and fire it. And repeat. 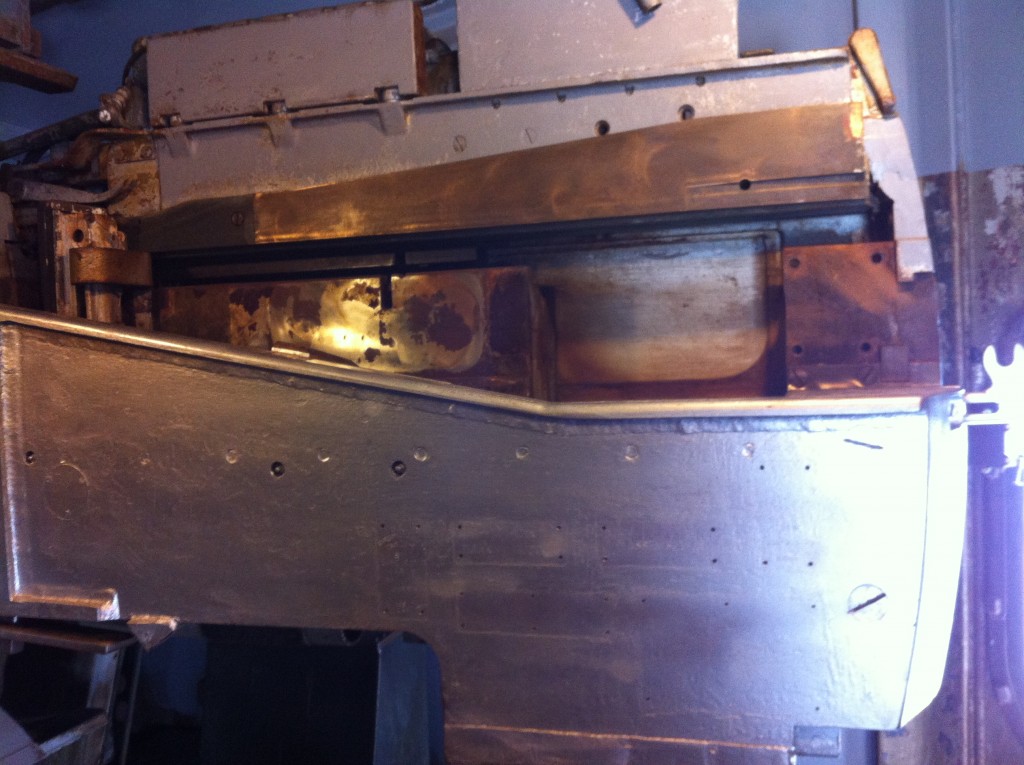 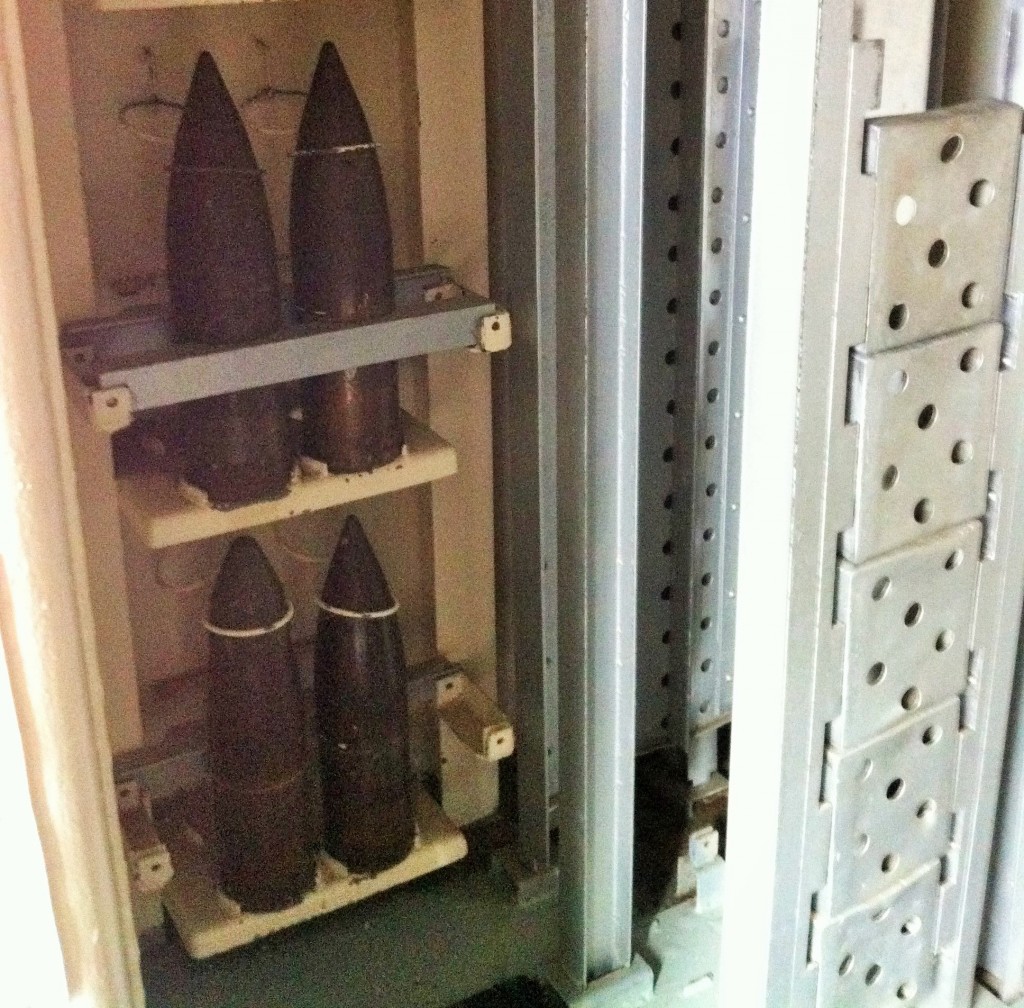 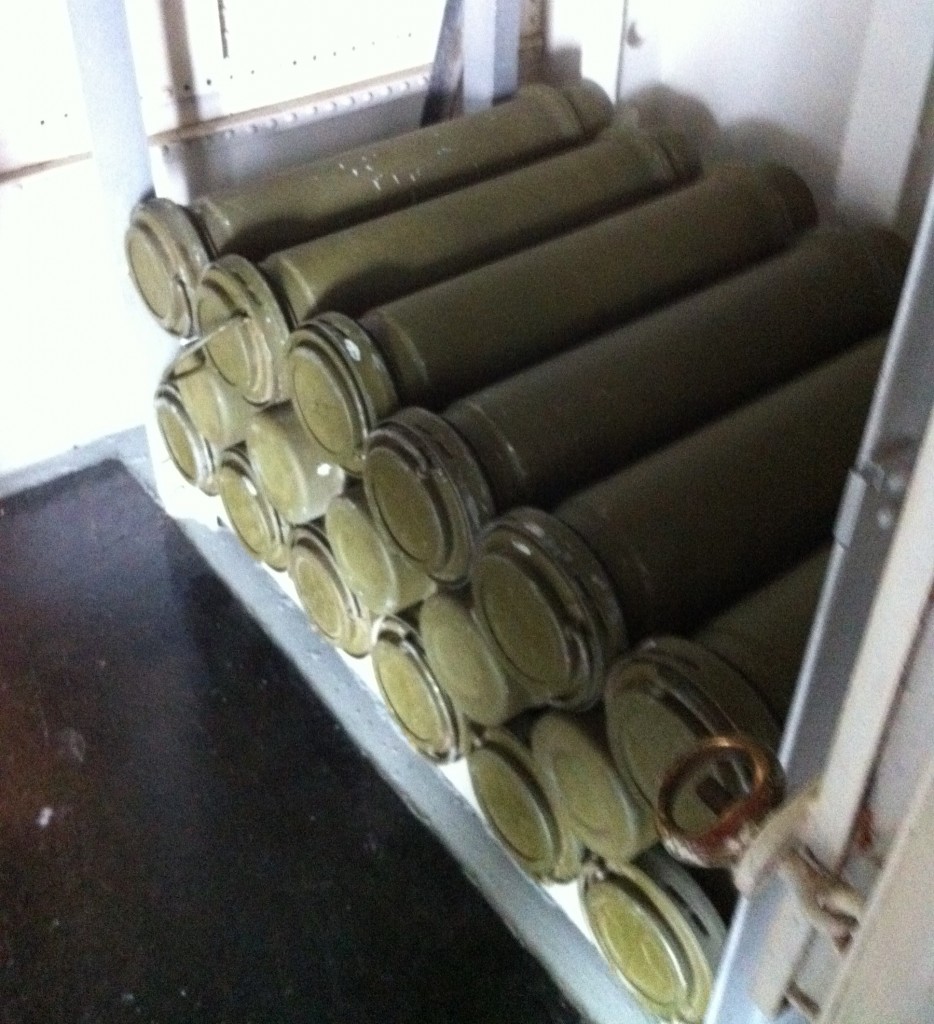 To reduce wear and tear on the guns, crews ran drills on a practice loading machine on the main deck. Dummy projectiles and powder cases filled with sand were loaded, rammed, and “fired.” The practice ammunition would fall into a collecting tray to be reused.

Practice loading machine, USS Cassin Young. My son Matthew inspects the practice projectiles stored to left. These were loaded into practice gun in the center and popped out the chute shown on the left once “fired.” Charlestown Navy Yard, July 2014 (Photo: Sarah Sundin)

Directly beneath each gun mount lay a handling room, with a magazine even deeper in the hull of the ship. Projectiles and cases were passed up from the handling room to the gun mount. The projectile hoist automatically set the fuzes of the projectiles as they were transported up to the gun mount. You can also see the panel boxes on the central column by the hoist, which play a role in Through Waters Deep. 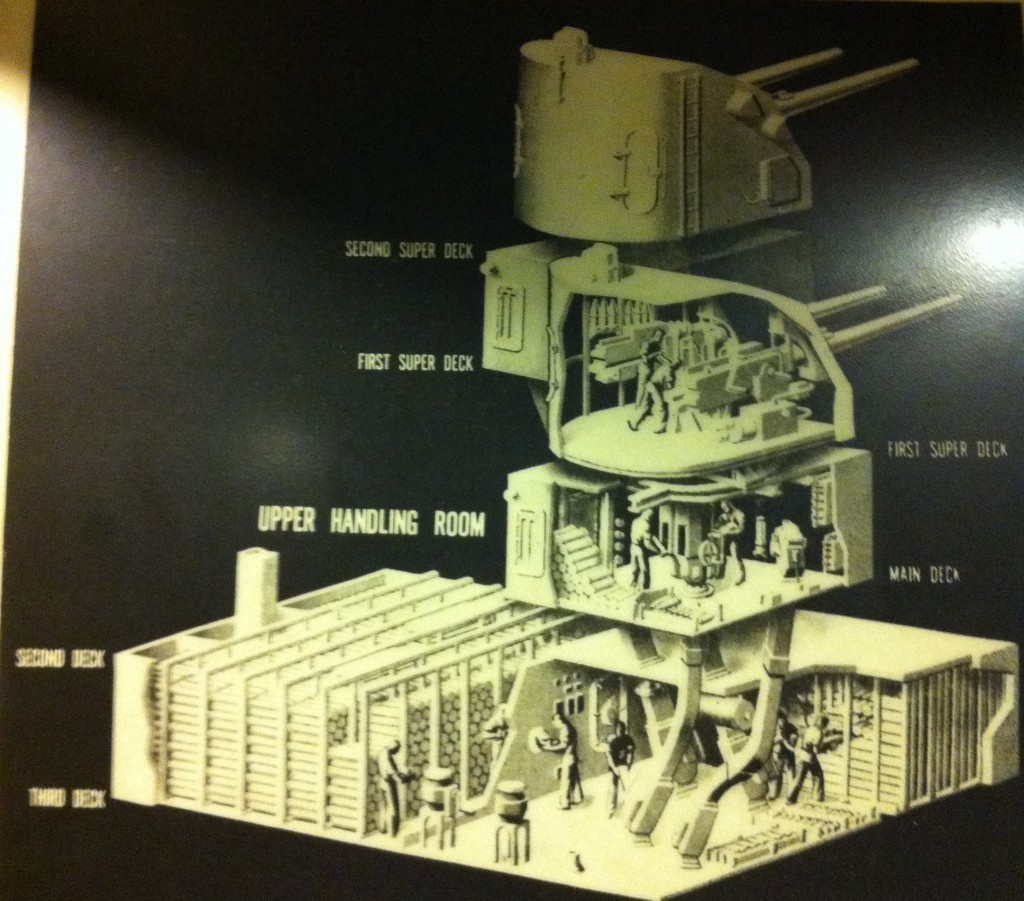 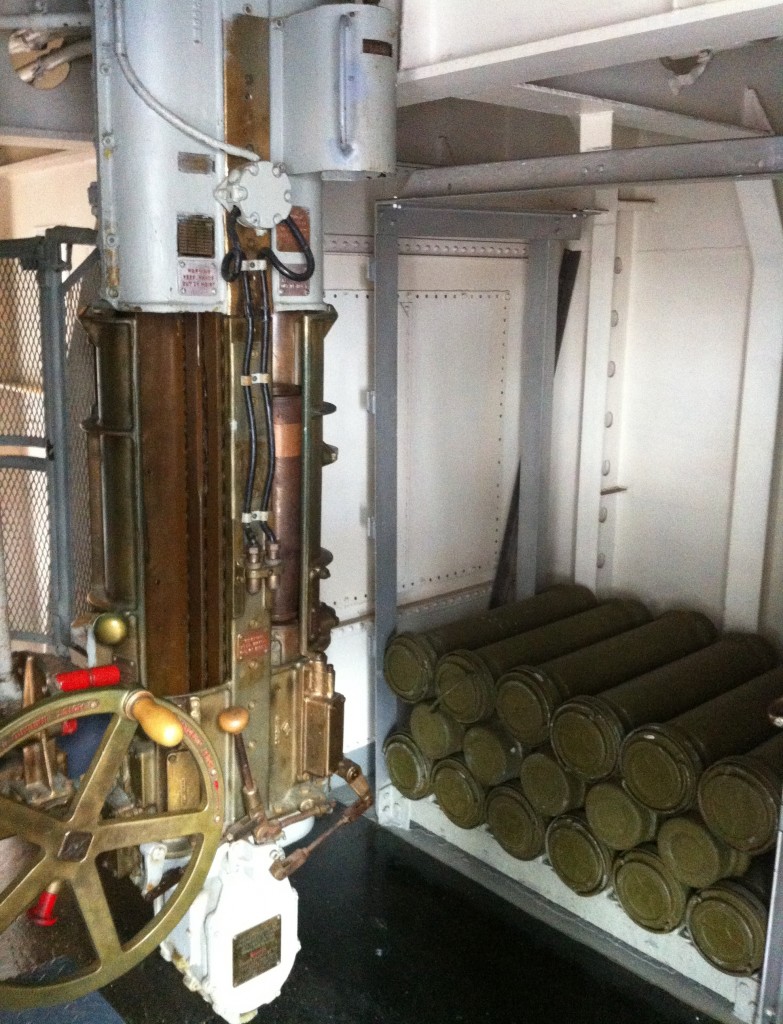 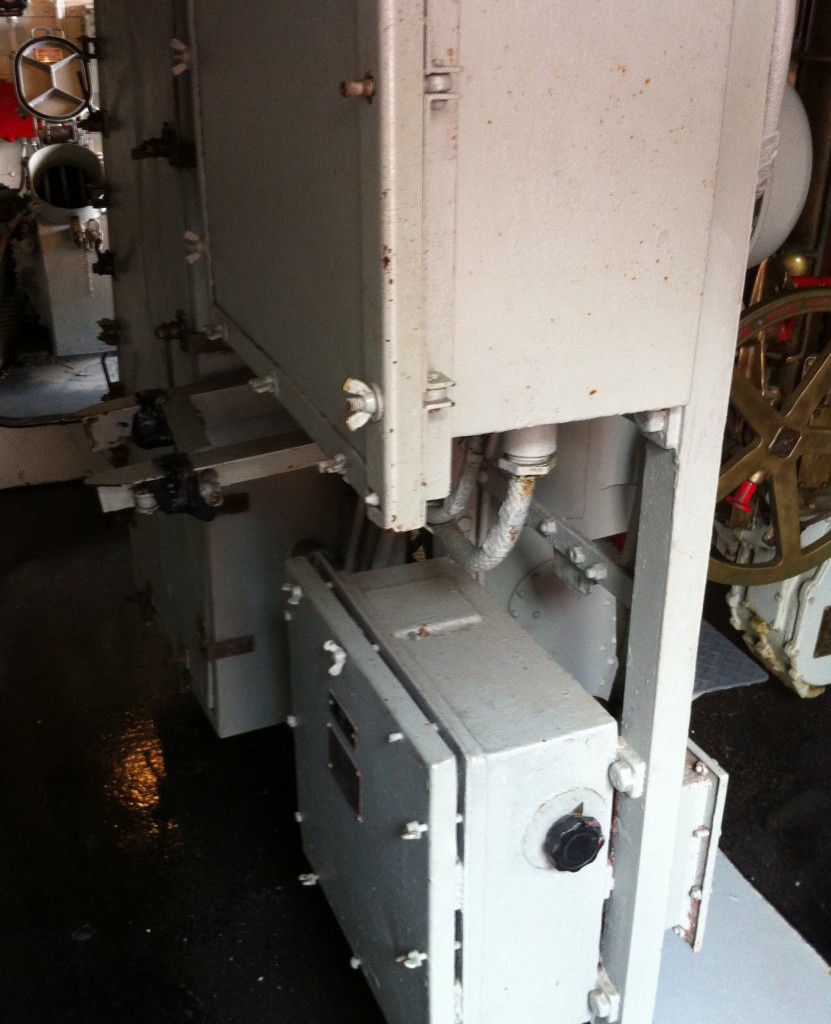 High on top of the bridge superstructure sits the Mark 37 gun fire director. A gun trainer and a gun pointer would determine bearing and elevation of the target, while the rangefinder operator determined the range. [The rangefinder pictured below is in the turret for a 16-inch gun on the battleship USS Massachusetts, considerably larger than in the Mark 37] Electrical signals from the trainer, pointer, and rangefinder were transmitted down to the plotting room, where the Mark 1 computer would calculate a solution and automatically elevate and rotate the 5-inch guns to bear on the target. 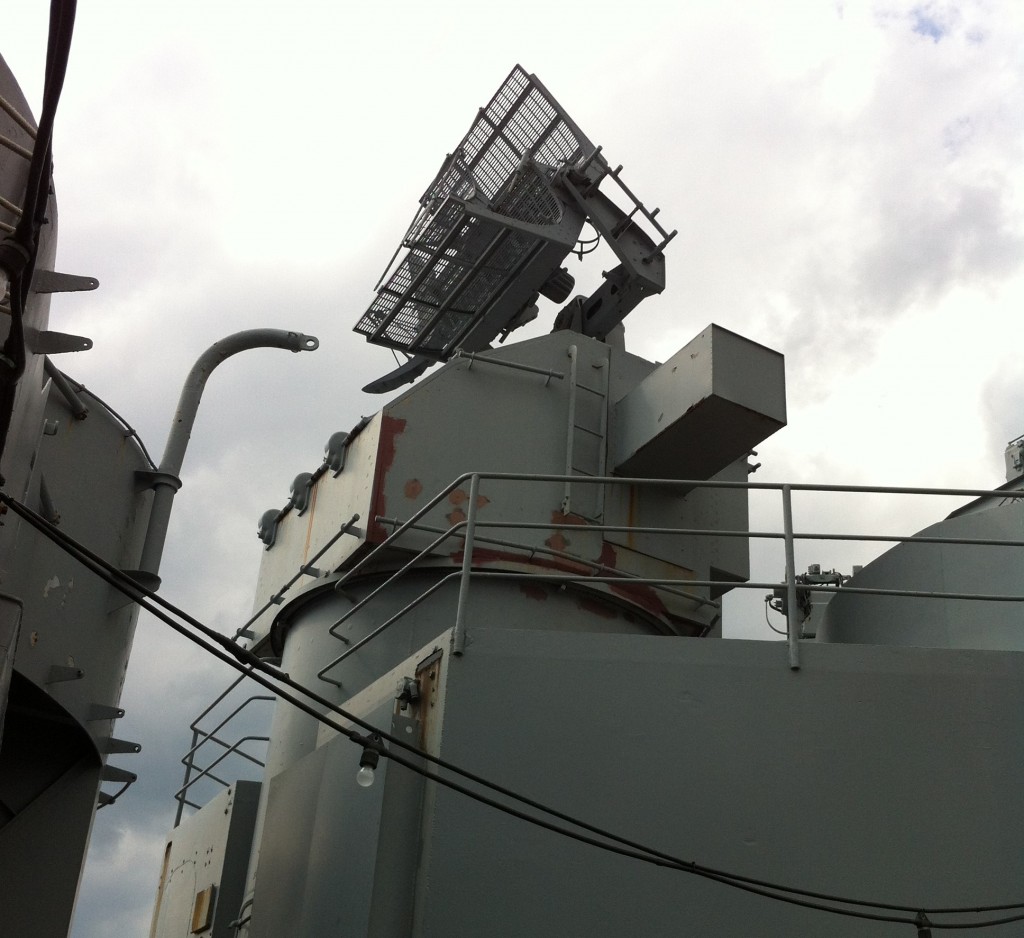 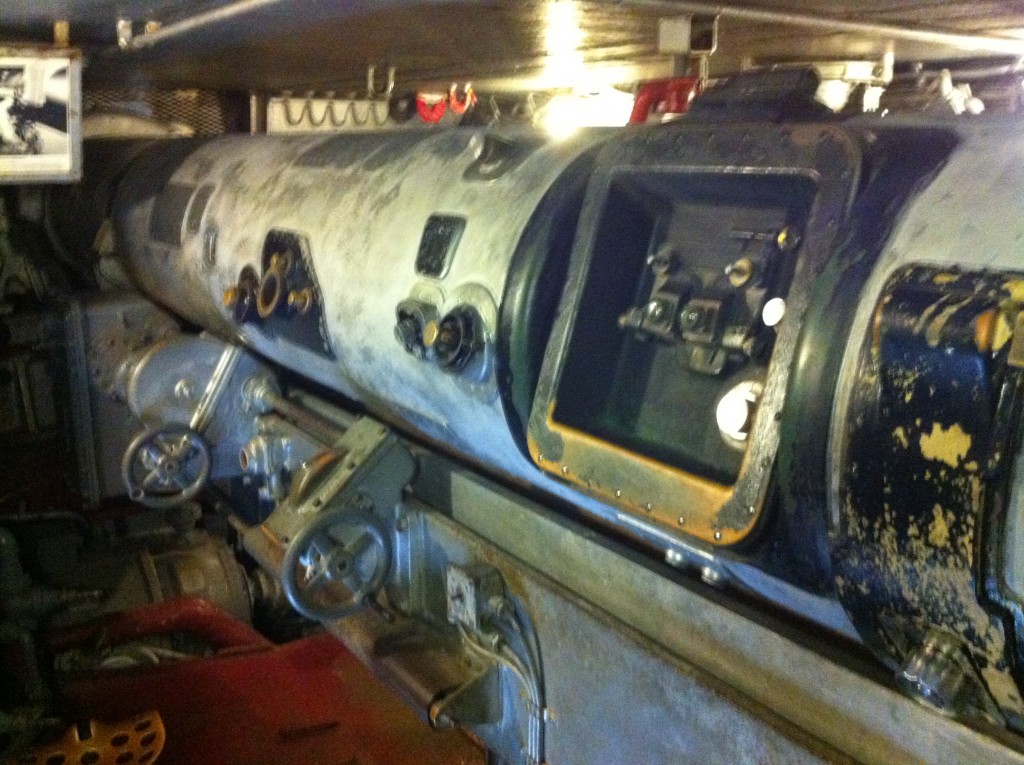 Below decks beneath the gun director lay the interior communications and plotting room with its Mark 1 computer. Not an electronic machine like today’s computers, the Mark 1 used gears, cams, levers, and electrical circuits to perform calculations. Some data was entered by turning dials and some was entered electrically. The Mark 1 took the target’s speed and range and bearing and elevation, the destroyer’s speed and course, and wind speed and direction to calculate a firing solution. A gyro compensated for the ship’s pitch and roll. A truly remarkable piece of machinery! 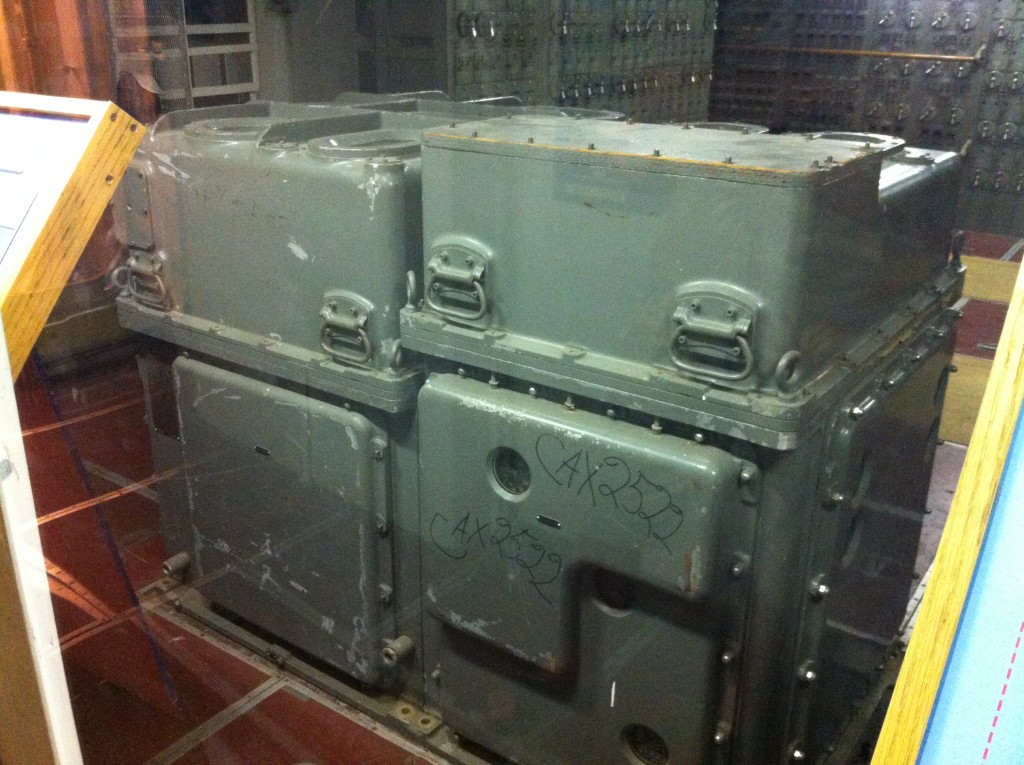 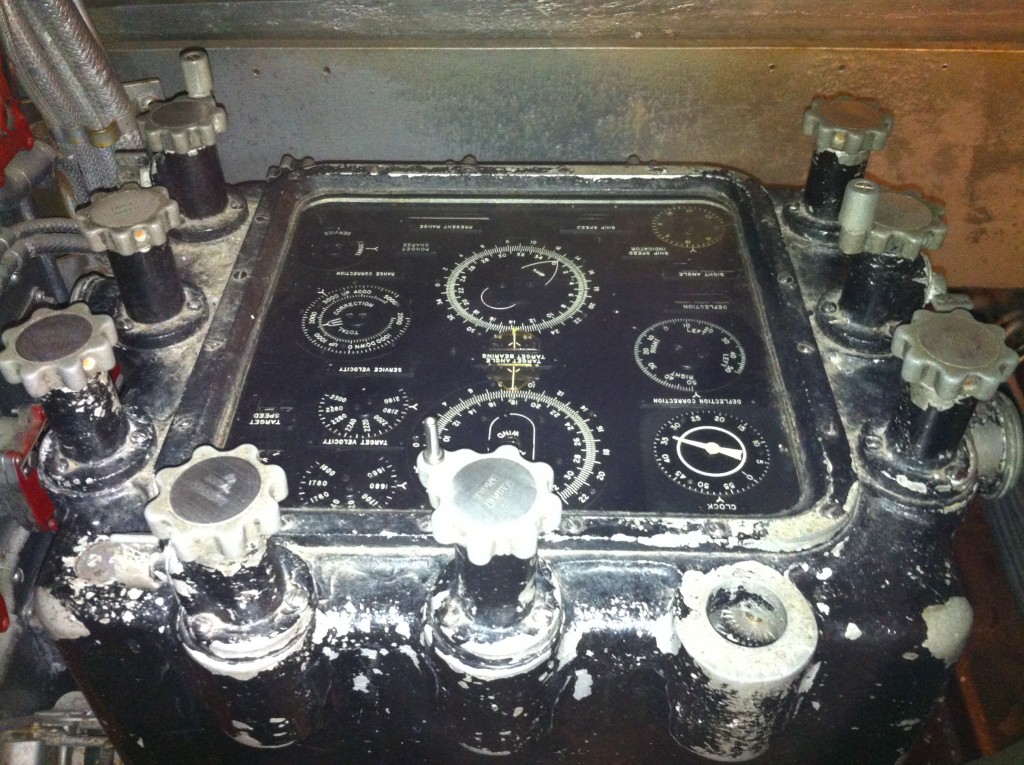