Announcing the title for Waves of Freedom, Book 3, coming from Revell Books, March 2017…

Thank you, everyone, for helping me brainstorm a title for Waves of Freedom, Book 3 back in November. There were so many wonderful and creative titles, and many were sent to Revell Books with my title questionnaire.

In November I gave away one book with the game, but I promised another way to win a book! If Revell Books picked YOUR entry as the official title, I’d enter you in another drawing, with one winner! Well, one person did pick the same title Revell picked…and that person is Steffani W! Steffani, I’ll contact you by email. You can have your choice of either Through Waters Deep (Waves of Freedom, Book 1) – or Anchor in the Storm when it comes out in May 2016 (Book 2).

So what is the title…? 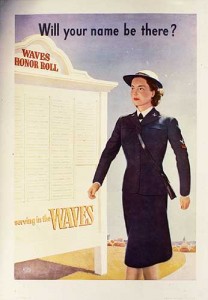 When Quintessa Beaumont learns the Navy has established the WAVES program for women, she enlists, determined to throw off her frivolous ways and truly contribute to the US effort in World War II. Determined to make admiral, Lt. Dan Avery employs his skills to fight U-boats, and the last thing he wants to see on his radar is fun-loving Tess. When Tess is assigned to work with Dan at the Anti-Submarine Warfare Unit in Boston, she finds her affections drawn by the no-nonsense officer, realizing he sees her as the greatest nonsense of all. As she works hard to prove her worth as a WAVE, she also investigates strange happenings in her friend Yvette Lafontaine’s group of French expatriates. Is there a spy in their midst? And has that spy infiltrated the anti-submarine research group? When Dan is assigned to a new escort carrier at the peak of the Battle of the Atlantic, he is torn between his lifelong career goals and his desire to help Tess on shore. While the German Navy challenges Dan’s skills, the changes in Tess challenge his notions—and his heart.

4 Responses to “Title Announcement – and a Giveaway Winner!”