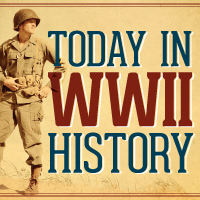 British commandos fly by glider to raid heavy water plant in Telemark, Norway, glider crashes, survivors are caught by the Germans and executed.