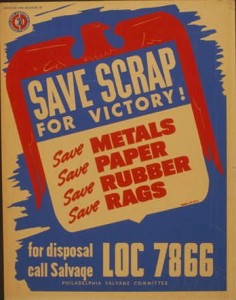 Seventy years ago, the United States was in the middle of its first major national scrap drive – for rubber.

r drive. People brought in old or excess tires, raincoats, hot water bottles, boots, and floor mats. In exchange they received a penny a pound. Although 450,000 tons of scrap rubber was collected, used rubber was found to be of poor quality.

In 1942 citizens scoured their homes, farms, and businesses for metal. Housewives donated pots and pans, farmers turned in farm equipment, and children even sacrificed their metal toys. Many people removed bumpers and fenders from their cars for the war effort. Communities melted down Civil War cannons and tore down wrought iron fences, sacrificing their history for their future.

These drives were often great community events, with performers, speeches, and opportunities to throw your scrap metal at a bust of Hitler.
Competitions were held to see which town, county, and state produced the most scrap, and the winners boasted of their feats. These drives had mixed results. Used aluminum was found to be useless for aircraft, but used tin, steel, and copper were easily melted down and reused.
Tin Can Drives

Publishers found their paper allotment cut by 15 percent. Newspapers, magazines, and books were printed on fewer pages with thinner paper and narrow margins. Paperback books had been introduced in 1939 and also allowed for less paper. However, more scrap paper was needed.
The children of America stepped up. The Boy Scouts and local schools organized regular paper drives, often coordinated with the tin can drives. The War Production Board started the Paper Troopers program, designed to sound like “paratroopers,” to involve schoolchildren in the effort. Participants received arm patches and certificates for collecting certain amounts.
Results
Scrap drives were a vital part of the American war effort. While not all scrap materials proved useful, many did and provided a small but significant source of material. Most importantly, these drives galvanized the Home Front and made each individual, even children, feel like a crucial part of the war effort.