How would you like the chance to name a character in my next novel? I’m teaming with the historic El Campanil Theatre in Antioch, California – pictured on the cover of my novel Blue Skies Tomorrow – for a fundraiser for the theater! We’re raffling off FIVE characters’ names in the first book in my… Read more » 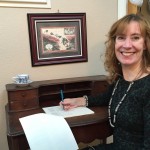