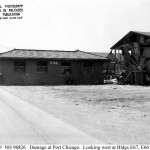 In the worst Home Front disaster of World War II, an explosion at the Naval Magazine in Port Chicago, California on July 17, 1944 killed 320 men, of whom 202 were black. The tragedy was followed by a work stoppage and a controversial mutiny trial. This sent ripples of change through the segregated armed forces…. Read more »