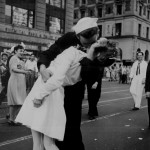 Seventy-five years ago, on August 14, 1945, World War II came to an end when Emperor Hirohito of Japan signed his acceptance of the Potsdam Declaration demanding unconditional surrender to the Allies. The surrender was announced in the United States at 7 pm Eastern War Savings Time. The following day, August 15, was officially proclaimed… Read more »