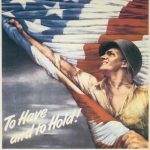 Seventy-five years ago this week, the United States held its first War Loan Drive. The Second World War cost the United States $300 billion dollars, with the federal budget rising from $9 billion in 1939 to $98 billion in 1945. How was the nation to pay for that? Taxes were increased with an additional 5… Read more »

The generation that fought World War II on the battlefield and on the Home Front had come through the Great Depression. While we cringe at today’s unemployment figures hovering around 10 percent (as we should), in 1932, 13 million were unemployed – 25 percent of the labor force at a time when most households had… Read more »