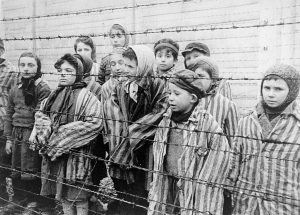 Child survivors of Auschwitz, 27 Jan 1945; Still photograph from Soviet film of the liberation of Auschwitz, taken by the film unit of the First Ukrainian Front (public domain via United States Holocaust Memorial Museum, courtesy of Belarussian State Archive of Documentary Film and Photography)