Thank you to the 2406 (!!!) people who entered the With Every Letter e-Reader Giveaway, and to the many people who joined me for the Facebook chat party last night. We had fun, didn’t we?

I am indebted to Amy Lathrop, Audra Jennings, and the rest of the wonderful Litfuse Publicity Group for putting together this contest and the blog tour, and for running the Facebook party. You ladies rock!

I’m proud to announce the winner of the e-Reader…Marek Wiacek of Washington! Congratulations, Marek! You will be contacted by e-mail for your mailing address, or you can contact Litfuse directly.

At the Facebook party, we held lots of giveaways for books, “Mellie’s First Aid Kits,” and gift certificates. A full list of the winners can be found HERE. While the party is over, you can still visit the Facebook Party Page and follow the fun discussion we had.

At the party, we also posted trivia questions about World War II and about me (the author questions could be answered from my website). We promised to post the answers here today…So here they are. 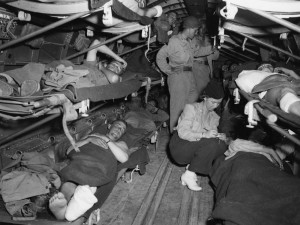 1. Before the Americans and British landed in North Africa in November 1942, Algeria was occupied by the Germans. True or False?
False. Vichy France, which collaborated with Nazi Germany, controlled French Morocco, Algeria, and Tunisia at the time. The Germans landed in Tunisia after the French surrendered.

3. North Africa is hot and dry year-round. True or False?
False. It can be quite chilly and rainy in the winter. Mud was a constant problem for the troops.

4. The Battle of Kasserine Pass was a defeat for the Americans. True or False?
True. In February 1943, Rommel’s forces pushed the Americans back a good fifty miles and took 2400 POWs. While humiliated at the time, the Americans learned many good lessons, shook up leadership, and quickly regained the lost territory.

1. I belong to a book club. True or False?
True. I’ve belonged to the Bibliovores book club since 2004. Love those ladies!

2. I met my husband at UCLA. True or False?
Trick question 🙂 My husband and I both attended UCLA – and our son is a student there now – but we didn’t meet there. We met while attending UC San Francisco School of Pharmacy. But we’re both big Bruin fans!

3. The first novel I wrote was 750 pages. True or False?
Sadly, this is true. It will never, ever be published. Nor should it be. You do NOT want to read it. Really, you don’t.

4. I teach Sunday school to third-graders. True or False?
Close…but false. I teach fourth- and fifth-graders. And they keep me hopping. What a great age!

5. I’m related to Rod Stewart. True or False?
Another trick question 🙂 My great-uncle, Roderick Stewart, was a B-17 pilot in World War II, and he went by Rod. And he was around long before the singer.

Thanks again to everyone who helped me celebrate the release of With Every Letter! I appreciate each one of you!