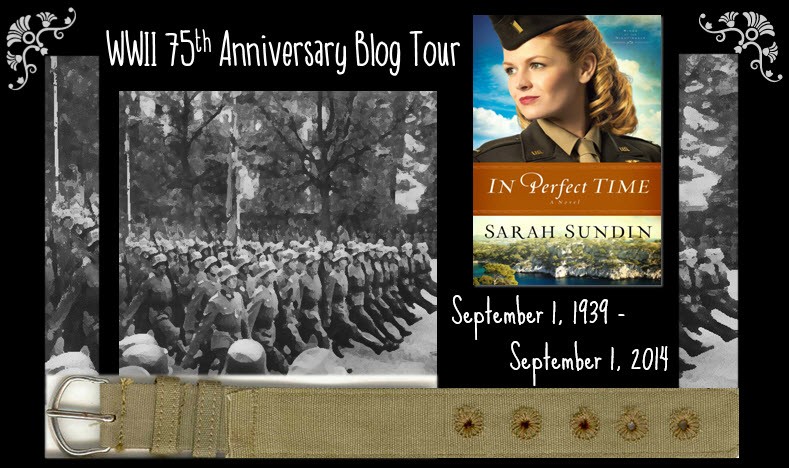 Welcome to the WWII 75th Anniversary Blog Tour! To commemorate the 75th anniversary of the start of World War II, eight authors of Christian WWII fiction have gathered. We’ll be sharing what our characters might have been experiencing that day, scenes from our novels, or our thoughts on this event.

Kristy Cambron, author of The Butterfly and the Violin

Tricia Goyer, author of From Dust and Ashes

World War II flight nurse Lt. Kay Jobson collects hearts wherever she flies, but C-47 pilot Lt. Roger Cooper seems immune to her charms. Still, as they cross the skies between Italy and southern France, evacuating the wounded and delivering paratroopers and supplies, every beat of their hearts draws them closer. Can they confront the fears and misunderstandings of the past in order to take hold of the future?

For this post, I imagined what Kay (and Roger…watch for him) might have been doing on September 1, 1939, the day World War II started . . .

Was it wrong to go out dancing the day a war started?

Kay Jobson glanced around the nightclub—the crowd small, the music subdued. Since Kay had arrived with her fellow stewardesses, Vera Viviani and Alice Olson, the band had only played slow songs like “Deep Purple” and “Rose Room” and “Begin the Beguine.”

Kay tipped up one corner of her mouth. “It was rather rude of Hitler to invade Poland on a Friday, don’t you think? The very day we have a layover in Chicago?”

Alice covered her giggle with one hand. “Oh dear. Is it right to laugh? To joke?”

Far from this too-quiet nightclub, the world had been turned upside down by a man with a bad mustache. What would this mean? How could Poland stand up to Germany’s mighty army? And would Hitler be satisfied if he conquered Poland? He hadn’t been satisfied by annexing Austria and Czechoslovakia.

Would Britain and France be sucked in to the fight? And would the United States be able to stay out of the fray? If so, for how long?

Kay swept her hair and her concerns off her shoulders, and she scanned the dance floor. Mostly couples. Not many unattached men. She liked the looks of the drummer, a solidly built man with auburn hair, but he hadn’t looked her way once and the boys in the band wouldn’t be dancing anyway.

“So what will this war mean to us?” Vera’s dark brown eyes narrowed in analysis. “Fewer flights, especially overseas, and especially if America enters the war.”

“Don’t talk like that.” Alice twirled a strand of blond hair, then tugged her finger free. “It’s not our fight.”

“That’s what we said the last time a war started in Europe,” Kay said.

Alice let out a soft moan.

If Kay didn’t do something, Alice would end up in tears, poor thing. “We have to find the bright side. War is hideous, but it brings change and innovation. We can be a part of it.”

“We’re stewardesses. Who can fly for pleasure in a war?” Vera drew in her full red lips.

“We’re also nurses. And maybe . . .” The article Kay had read in a nursing journal flashed in her memory. “Maybe the Army will start using our passenger planes for medical air evacuation. And maybe they’ll let nurses care for the patients.”

Something sparked in Vera’s eyes. “I saw that article. I didn’t think anything of it at the time, but now . . .”

“So do I.” A middle-aged man stood by the table, gray-haired but trim. He gave all three ladies a polite smile, then bowed his head to Kay. “I see an opportunity to dance. May I have the honor?”

The band played “Until the Real Thing Comes Along,” and Kay stood and took the gentleman’s arm and let him twirl her around the dance floor.

Was it wrong to dance on the day a war started?

For Kay Jobson, it was perfectly right.