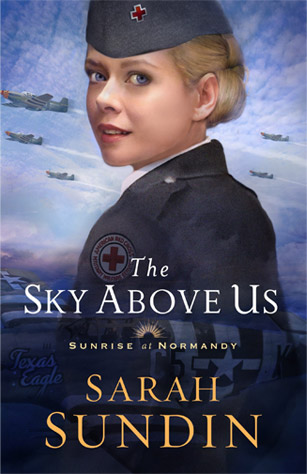 Secrets as vast…
Love as unreachable…
As the sky above them.

Numbed by grief and harboring shameful secrets, Lt. Adler Paxton ships to England with the US 357th Fighter Group in late 1943. Determined to become an ace pilot, Adler battles the German Luftwaffe in treacherous dogfights over France as the Allies struggle for control of the air before the D-day invasion.

Winner of the 2020 Carol Award

“[A] lovely tale of a budding romance, the strength of faith, and finding small comforts during the tumult of war.”

“The Sky above Us takes readers from exhilarating heights in the cockpit during battles in the clouds to the atmospheric rush of landing behind enemy lines. Relatable characters, challenging dichotomies, and timeless romance make this an inspirational must-read.”

[Open] [Close]
Q: Do you have photos from your research trip to England and Normandy?

A: Please see my blog tour, where I share tons of pictures!

Tour: D-Day in the Air – sites related to the aerial part of D-day

Q: I’m interested in the American Red Cross in World War II. Do you have any more information?

A: I do! Please see the following articles.

“10 Facts about the Red Cross in World War II from THE SKY ABOVE US,” on Fresh Fiction.

To see photos of the actual Red Cross workers and Aeroclub at Leiston Army Airfield, please visit this page on the website of legendary ace pilot of the 357th Fighter Group, Clarence “Bud” Anderson. If you have hours to kill, this website is teeming with photos and stories from this exemplary fighter group.