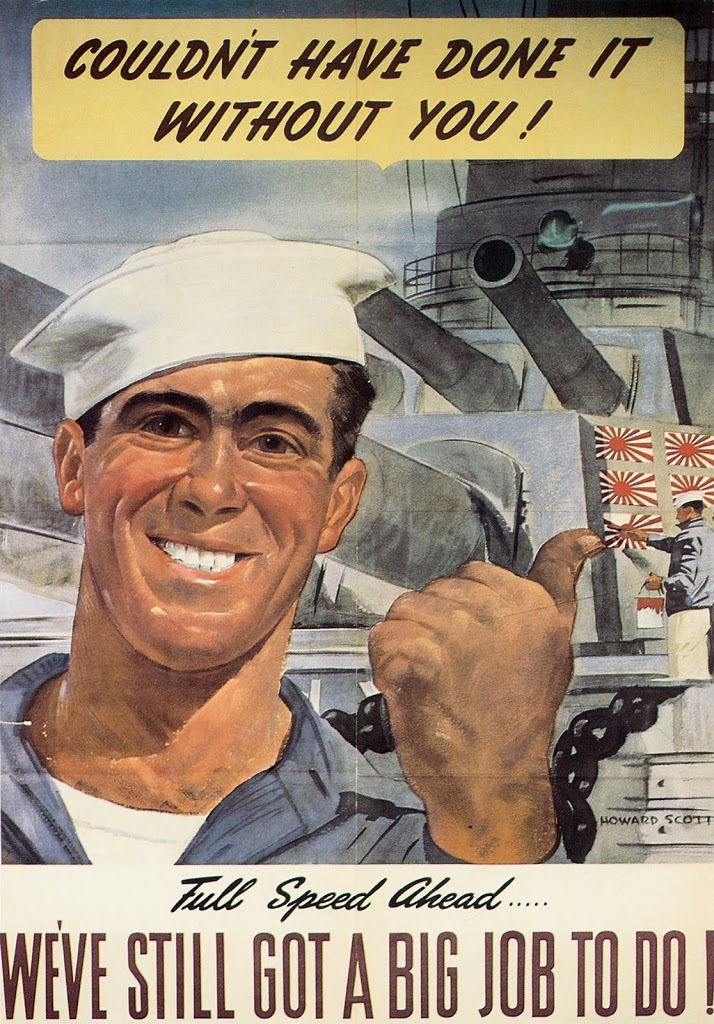 The brave pilot risking his life for the sake of his country. The soldier and sailor and Marine in combat. These are the people we think about when we think of World War II. Their stories are told in movies and documentaries and books – including mine.

But this poster recognizes the truth – teamwork won the war. Even in the armed forces, few men saw combat. In the U.S. Eighth Air Force based in England, ten men served in noncombat positions for every man in the air. And while 11 million men and women served in the U.S. military, the population of the United States in 1940 was 132 million, and almost every man, woman, and child on the Home Front was involved in the war effort.

Men and women worked in factories, manufacturing the ammunition, weapons, planes, ships, and vehicles needed by the Army and Navy. They worked on the farms, producing enough food for civilians and military at home and abroad. Adults and children volunteered, collecting scrap, preparing surgical dressings, and helping in hospitals. Most people put large portions of their earnings into War Bonds to finance the heavy needs of total war.

This concept plays out today in corporations, businesses, and churches. Most organizations have their “fighter pilots,” the upfront person who draws attention – the founder, the CEO, the pastor, the celebrity, the idea man/woman. But no organization could function on the fighter pilot alone. The wise pilot knows this, shows gratitude, and recognizes the help he receives. “You buy ’em, we’ll fly ’em!”

Likewise, every organization has “noncombat personnel” and “civilians buying War Stamps.” As in World War II, we should take pride in our contributions, even if they seem boring or insignificant, and recognize the part our roles play in the whole. I used to work in the church nursery, and no one was allowed to say, “I just hold babies.” No, we introduced babies to the love of God and the love of the church, and we allowed stressed-out young parents to grow spiritually.

No job is too small, and no job is the most important.

How do you see this concept in your world?