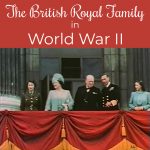 In 1940, things looked bleak in the United Kingdom. Hitler had swallowed up Poland, Norway, Denmark, France, Belgium, the Netherlands, and Luxembourg. In July, the Battle of Britain began as the Luftwaffe began attacking British shipping. In August the target shifted to the RAF, and by September 6, the British had lost 466 planes. Then… Read more »