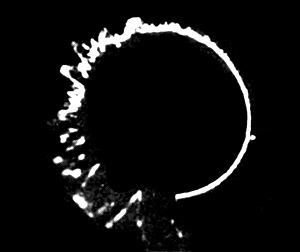 The effect of “Window” on the display of a German Giant Würzburg (Würzburg-Riese) radar: the right half shows a normal display with a target blip in the 3 o’clock position; the left half shows the effect of jamming by “Window,” making target blips indistinguishable. (Imperial War Museum)