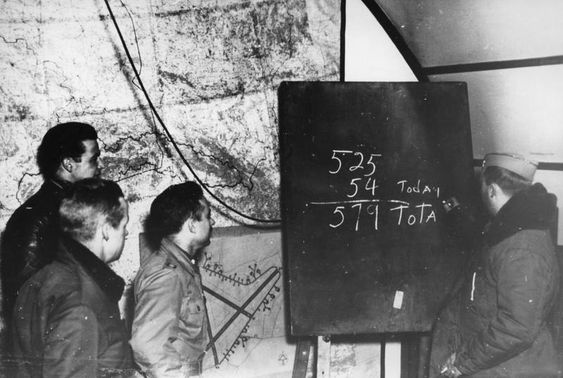 Colonel Dregne of the US 357th Fighter Group gives a briefing to pilots Foy, Storch and Evans at Leiston Army Air Field in England, 14 Jan 1945, showing the 54 victories earned by the group that day (later revised to 56.5 victories), and the group’s 549 total victories (Imperial War Museum, Roger Freeman Collection)

British chemists (pharmacists) are granted an exemption to sugar rationing in order to coat pills.

In Burma, Indian 19th Division attempts to cross the Irrawaddy River at Thabaikkyin but withdraws under fierce Japanese bayonet attack.