Where Dandelions Bloom, by Tara Johnson 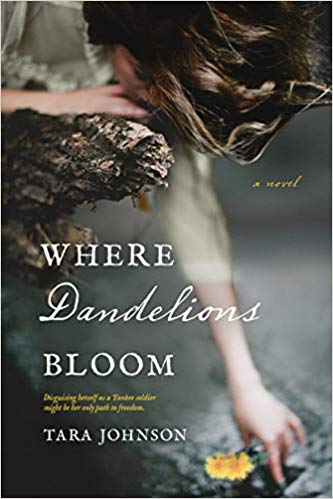 To escape her abusive father and an arranged marriage to a vile man, Cassie Kendrick makes a desperate decision. She chops off her hair, dresses as a man, and enlists in the Union Army during the Civil War under the name of Thomas Turner. As a crack shot and no stranger to rough living, Cassie is accepted in her unit.

Overcoming his childhood in the slums of New York, Gabriel Avery has just landed his dream job – working for the famous Mathew Brady as a battlefield photographer. He quickly befriends the soldiers, even breaking through the defenses of the strange and reclusive Thomas Turner.

As she struggles to conceal her gender from her fellow soldiers, Cassie also battles her growing attraction to the handsome and personable Gabriel. But what will happen when her regiment enters combat?

In Where Dandelions Bloom, Tara Johnson brings to life a fascinating aspect of the Civil War – how several women succeeded in fighting, disguised as men. Cassie and Gabriel are complex and interesting characters, facing difficult dilemmas, deep secrets, and painful betrayal. A thoughtful message and light touches of humor make this novel even more enjoyable. A keeper!