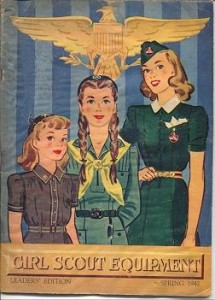 When World War II started, the Girl Scouts were well poised to take a solid role on the Home Front.

In the 1940s, the Girl Scouts had three levels: Brownies (ages 7-9), Intermediates (ages 10-14), and Seniors (ages 14-18). Troops existed throughout the United States – and even flourished in the internment camps for Japanese-Americans. 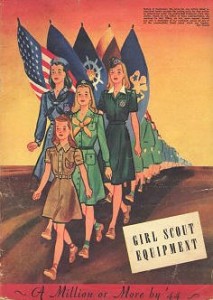 The official Girl Scout uniform of the 1940s consisted of a brown dress for Brownies, a medium green dress for Intermediates, and a darker green for Seniors. Mariner Scouts (Girl Scouts who specialized in boating and water skills) had a special blue uniform. Wartime restrictions on the use of metals led to replacing the zippers in the uniforms with buttons. Compare the catalog from 1942 above with the catalog from 1943 on the right. Badges were sewn on the sleeve, a challenging task.

For those of us who live for Girl Scout cookie time, one wartime sacrifice seems especially painful. Rationing and shortages of sugar and butter meant a discontinuation of Girl Scout cookies for the duration. While they were sold in 1942 and 1943, they were unavailable in 1944 and 1945. In 1944, the Girl Scouts first sold calendars on a nation-wide level to fill the funding hole. 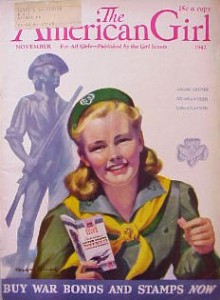 In 1942, the Girl Scouts started a hospital aide program for Senior girls. These high schoolers were trained to help in hospitals–feeding patients, performing clerical work, serving as messengers, preparing supplies and equipment, and making beds. No official uniform was provided, but many girls made smocks of green-and-white striped cloth, or wore white smocks over their Girl Scout uniforms.