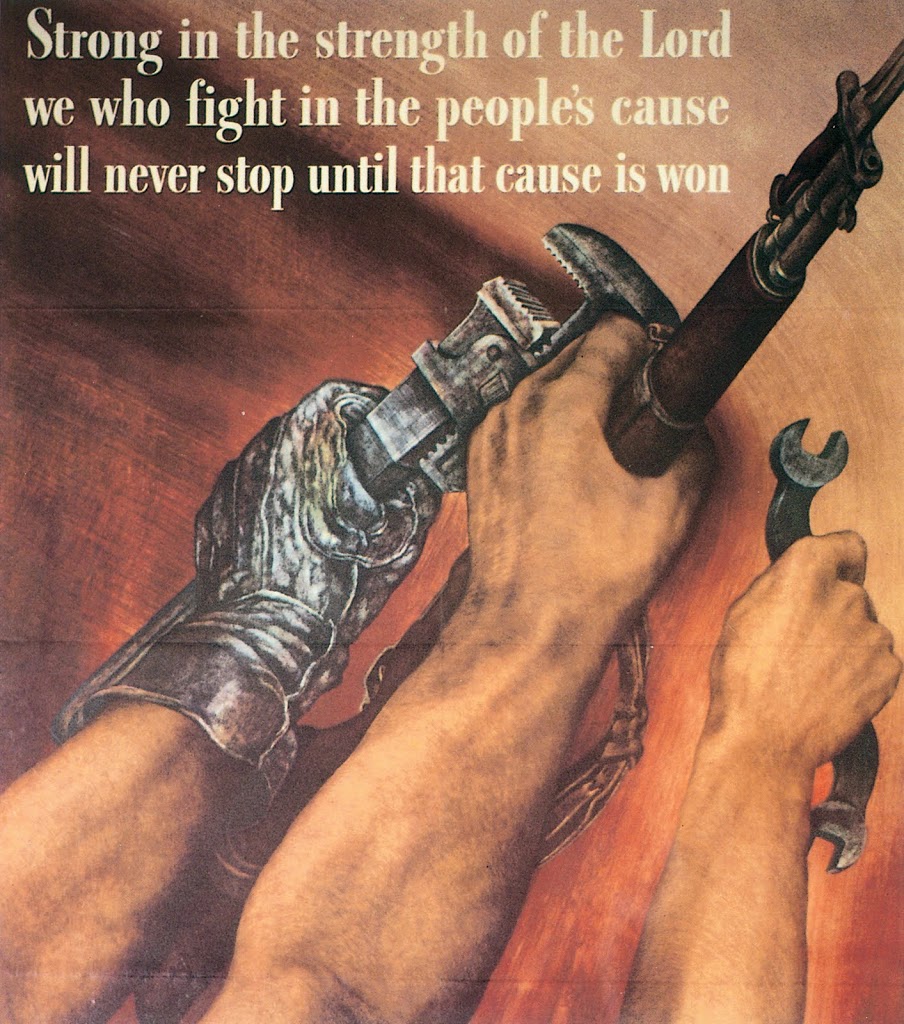 Here’s a poster you wouldn’t see today: “Strong in the strength of the Lord, we who fight in the people’s cause will never stop until that cause is won.” While researching my World War II novels, I was surprised at the religious tone in the writings. Top Ten songs like “Comin’ in on a Wing and a Prayer,” “Praise the Lord and Pass the Ammunition,” and a humble prayer in the middle of the lyrics of “American Patrol.” A prayer on the front page of the local newspaper on D-Day. Mainstream movies and books in which people attend church and pray.

Freedom of religion is a good thing. I’m thankful I live in a country where we’re free to worship God as we see fit. The founders of the United States remembered too well what happened when religion was mandated by the government rather than by the individual. However, they certainly never imagined an America free from religion.

During World War II, the majority of Americans were people of faith. This gave the nation a bedrock foundation of moral truth on which decisions were made. The human decision-making process comes from a combination of emotion and logic. Emotion, as we all know, is easily swayed. But logic has flaws as well – logical, well-reasoned arguments can be made on polar opposite sides of any issue. Logic and emotion have been used to justify some of the grossest atrocities of modern times, and are being used now to justify what would have been unthinkable in the 1940s.

A civilization can remain civilized only when the balloons of logic and emotion are tethered to the foundation of truth, to the basic knowledge of right and wrong. Cut less from this mooring, logic and emotion blow any which way and can take our society to ruin.

In the 1940s, people of faith spoke up without apology – but without shrill, angry, off-putting voices. They made decisions grounded in God’s truth, and tried their best to live lives of morality and integrity. Their strength came from the Lord, and that strength brought them through the horrors and deprivation of war.

I pray that America can return to the source of its strength so we can face whatever challenges come in the future.