Lessons from the 1940s – Liberty and Justice for All? 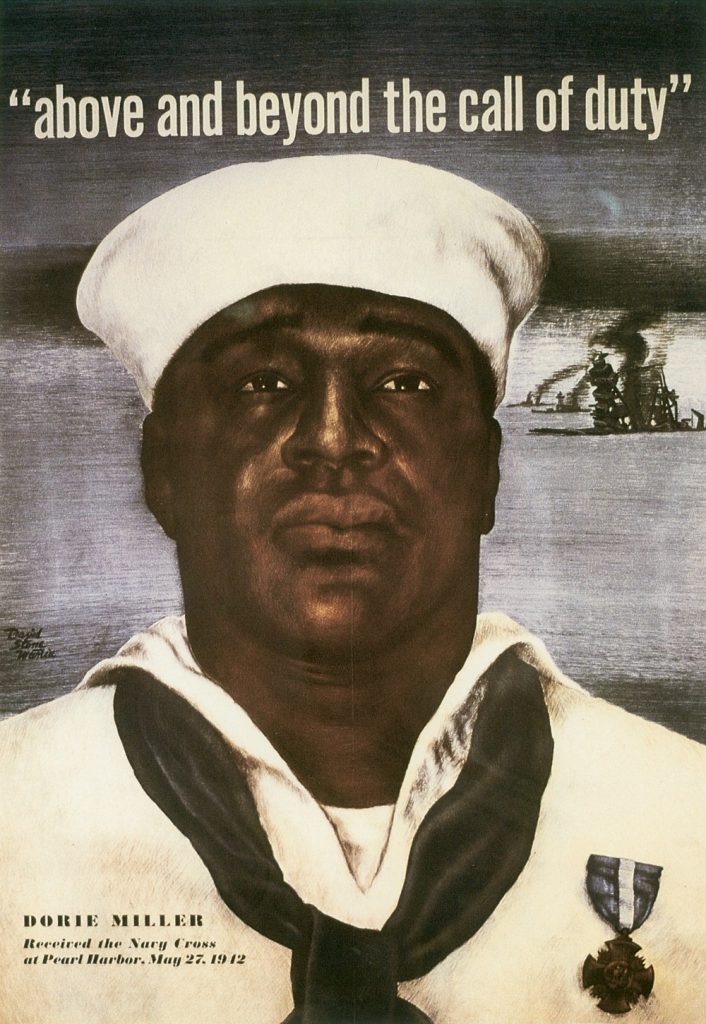 US poster, 1943, honoring Dorie Miller, recipient of the Navy Cross for his actions at Pearl Harbor

On the morning of December 7, 1941, Mess Attendant Second Class Doris “Dorie” Miller (pictured in the poster) was collecting laundry on board the USS West Virginia in Pearl Harbor. The Japanese attacked. The alarm for general quarters sounded, and Miller reported to his battle station, an antiaircraft battery amidships. It had already been destroyed. A heavyweight boxer, Miller carried wounded sailors to safety, aided the mortally wounded captain, and manned a .50 caliber machine gun – a weapon he’d never been trained to use – and was credited with downing a Japanese fighter plane. For his bravery, he received the Navy Cross on May 27, 1942. Sadly, he perished when the USS Liscome Bay was sunk by a Japanese submarine on November 24, 1943. (Source: http://www.history.navy.mil/faqs/faq57-4.htm)

Dorie Miller was the first African-American hero of World War II, and not the last. There would have been even more if the US armed forces hadn’t been segregated, with black troops in separate units under white officers, usually assigned to the mess or to manual labor behind the front. The reasoning was that black men weren’t capable and that integrated services would “offend the sensibilities” of white Southerners. Both justifications are appalling.

Racial tension came to a boil during World War II due to unprecedented mobilization that introduced northerners – black and white – to conditions in the south, and exposed the cancer of racism in American society. Race riots erupted in Detroit, Philadelphia, Birmingham, and many other cities. Black troops fumed when German and Italian prisoners of war received better treatment than they did, and they wondered why they should fight for freedoms abroad that they didn’t enjoy at home.

On July 17, 1944, an explosion blew apart two munitions ships at the Naval Magazine in Port Chicago, California, killing 320 men, most of whom were black. The black sailors had been loading ammunition under unsafe conditions and indifferent white leadership. Fifty of the survivors refused to load ammunition again. Instead of being convicted of insubordination, all fifty men were convicted – after eighty minutes deliberation – of mutiny, a capital offense. The convicted included two men who had medical excuses for why they refused to work.

The unexpected benefit of the Port Chicago Explosion, the largest US Home Front disaster of the war, was that it opened the eyes of the general public. Outrage grew to such an extent that the US Navy, the most segregated of the services, became the first to become truly integrated. Injustice had been exposed, and seeds were planted that would lead to the Civil Rights Movement in the 1950s and the end of legal segregation.

While World War II showcased the best in the American character, it also highlighted the worst. The war trumpeted our national ideals, and showed where we fell short. We still fall short today. Segregation is gone, blatant discrimination is illegal, but subtle racism exists – often subconscious – in attitudes and thoughts. And in all races. Looking to our past shows us how far we’ve come – and where we have room to grow. I have faith that the US can someday become a land where a person’s race leads to neither discrimination nor special privileges, and where all people can achieve if they have the character, ability, and drive to do so.

2 responses to “Lessons from the 1940s – Liberty and Justice for All?”