What could be more American than Hershey bars, homemade cookies, and birthday cake? During World War II, these items were hard to come by. Today marks the 75th anniversary of the start of sugar rationing in the United States.

On April 27, 1942, families registered for ration books at their local elementary schools. One book was issued for each family member and had to be surrendered upon death. The sale of sugar was halted for one week to prepare for the program. To discourage hoarding, each family had to report how much sugar they had in stock over a certain amount – and the corresponding number of stamps was removed from the book.

Home canning was encouraged during the war – however, canning requires sugar. To provide for this patriotic need, each person could apply for a 25-pound allotment of canning sugar each year. Each local ration board determined the quantity and season of availability based on the local harvest. A special canning sugar stamp in the ration book had to be attached to the application. In 1944, confusion arose when “spare canning sugar stamp 37” was called for – but many people mistakenly used the regular sugar stamp 37, invalidating it for normal household purchases. 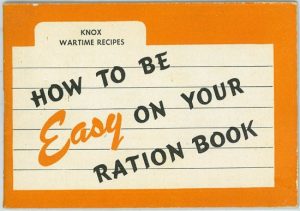 Just because you had a sugar stamp didn’t mean sugar was available for purchase. Shortages occurred often during the war, and in early 1945 became acute. As Europe was liberated from Nazi Germany, the US took on the main responsibility for providing food to those ravaged countries. On May 1, 1945, the sugar ration was cut to 15 pounds per year for household use and 15 pounds per year for canning – a total of eight ounces per week. Sugar was the last product to remain on rationing after the war. The program was discontinued in June 1947.