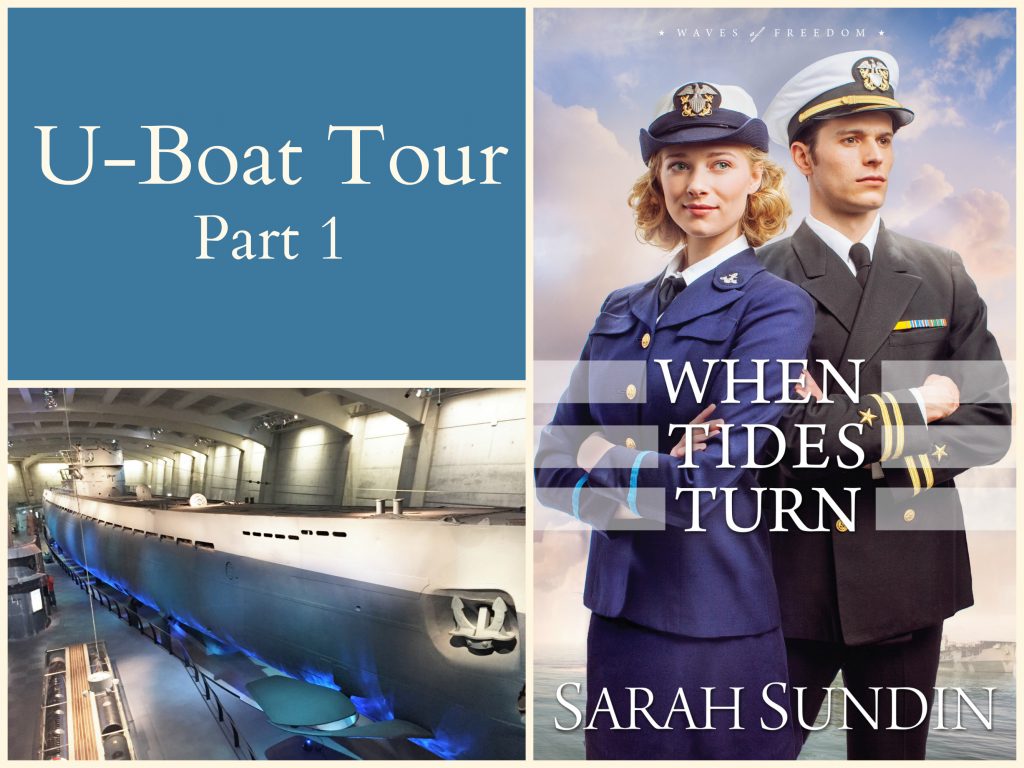 In my novel When Tides Turn, my fictional hero, Lt. Dan Avery, serves aboard the auxiliary carrier USS Bogue (later called an escort carrier). The aircraft of the Bogue were the first to sink a German U-boat without assistance from surface ships. The escort carriers soon became the nuclei of “hunter-killer” groups, along with destroyers or destroyer escorts. These groups not only escorted convoys, but were sent to hunt down U-boats based on intelligence gleaned from intercepted and decrypted German Enigma messages and from radio direction-finding.

While researching escort carriers for this novel, I read one of the most thrilling and fascinating stories to come out of World War II—the capture of U-505 by the USS Guadalcanal group on June 4, 1944. Currently the U-505 is in a gorgeous display at the Chicago Museum of Science and Industry. When my husband and I had the honor of attending our son’s graduation from Navy boot camp at Great Lakes Recruit Training Center near Chicago in 2016, there was only one item on my must-see list. After our son, of course.

As an added bonus, chief petty officer selectees from Great Lakes served as docents, showing artifacts from the U-505. The lovely young lady below was showing me ACTUAL binoculars from the U-505, which she encouraged me to HOLD! I mentioned our son had just graduated from Great Lakes. Turned out her partner, the gentleman below, was our son’s Recruit Division Commander! We heard stories. 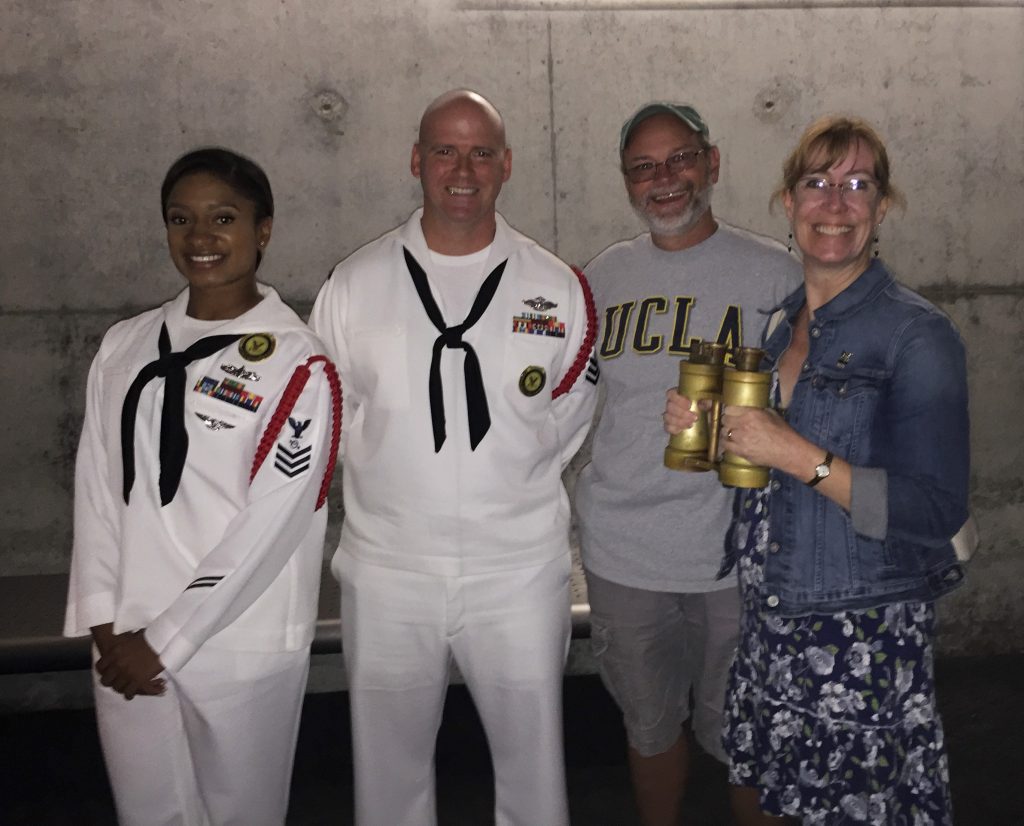 Two Navy docents from Great Lakes at the Chicago Museum of Science and Industry (our son’s RDC is the gentleman in white), my husband, and me holding the actual binoculars from U-505! (Photo: Sarah Sundin, August 2016)

On May 15, 1944, the USS Guadalcanal departed Norfolk, VA, with a goal—not just to sink U-boats, but to capture one intact. Capt. Daniel Gallery was convinced it was possible, and he instructed the crews of the five destroyer escorts in Task Group 22.3 to draw up plans and prepare boarding parties. 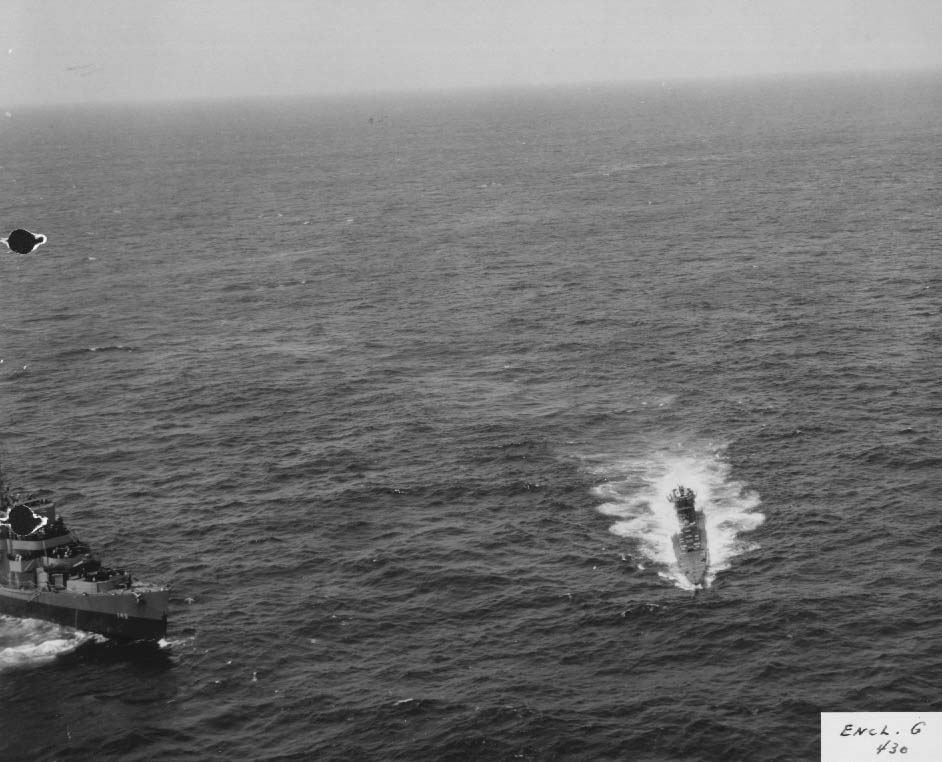 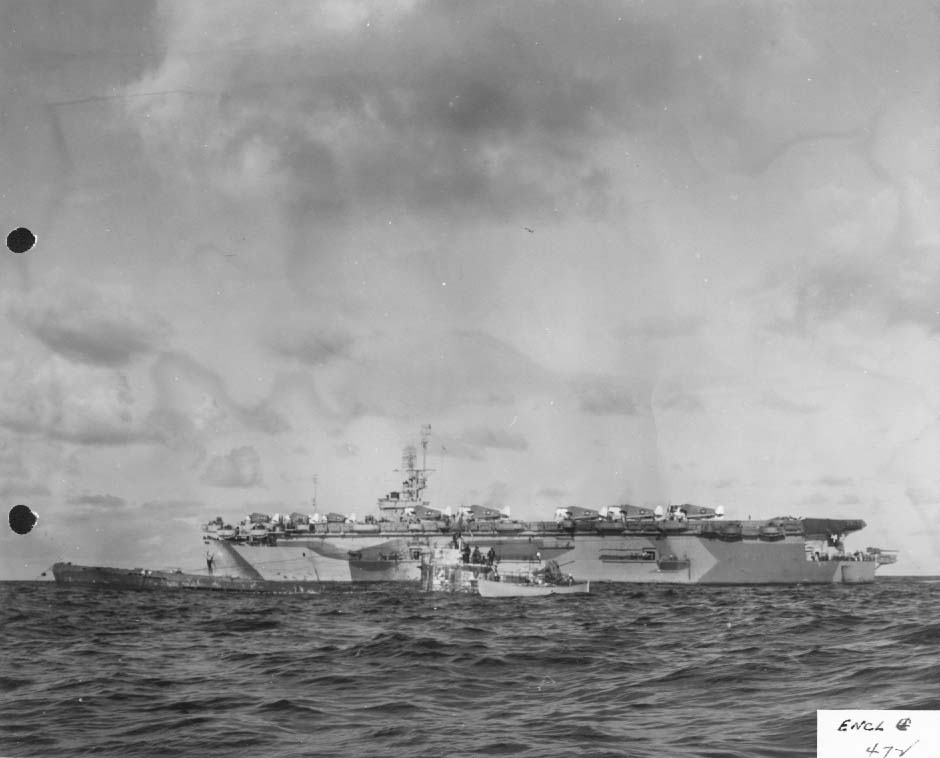 While patrolling off the coast of West Africa on May 31, the Guadalcanal received a message from the US Tenth Fleet—they had intelligence of a German submarine about 300 miles north of their current position. Although low on fuel, Captain Gallery decided to investigate. 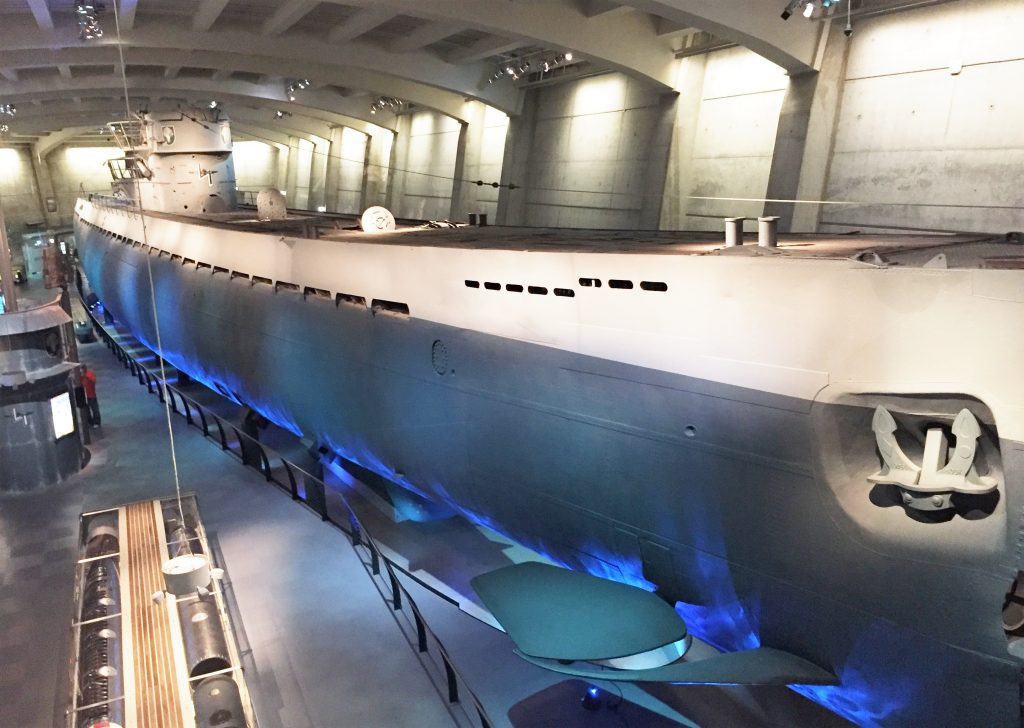 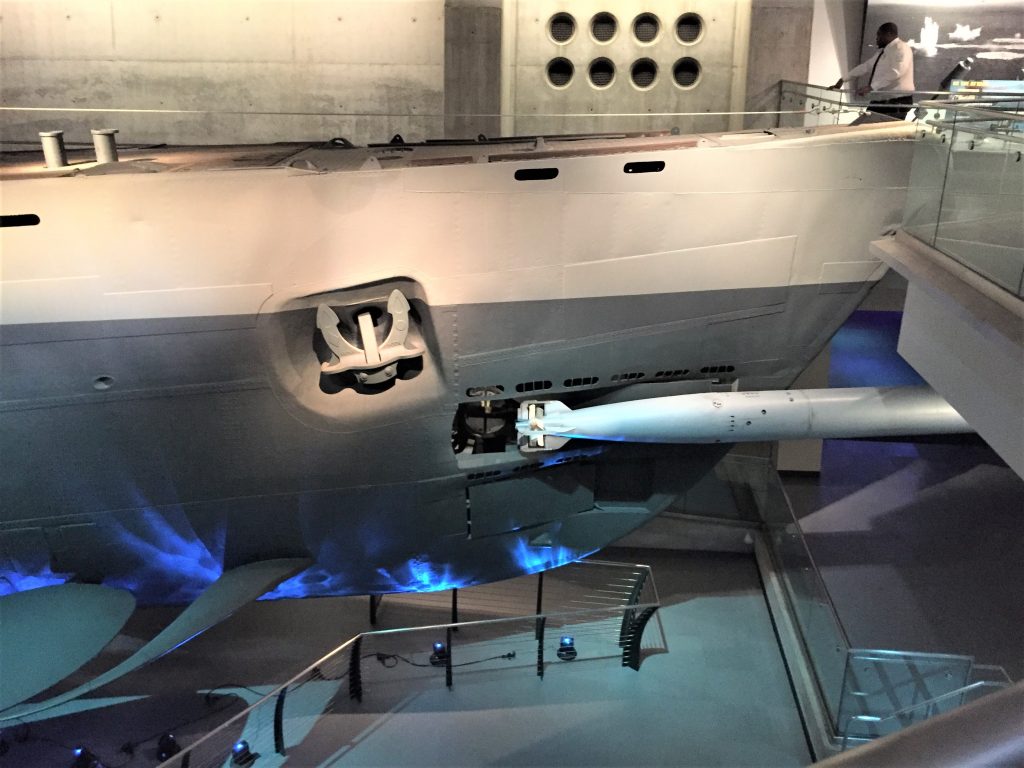 Bow of U-505 with torpedo, Chicago Museum of Science and Industry (Photo: Sarah Sundin, September 2016) 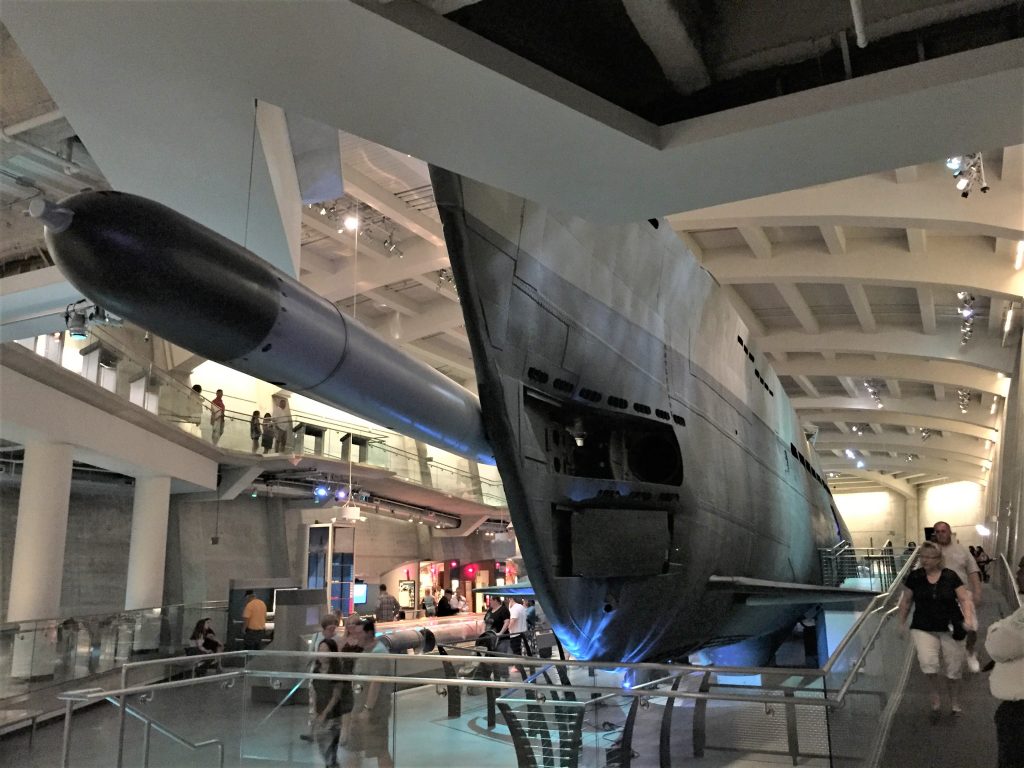 Bow of U-505 from underneath, Chicago Museum of Science and Industry (Photo: Sarah Sundin, September 2016)

On June 4, 1944 at 11:09 am, the USS Chatelain made a sound contact and verified it as a submarine within three minutes. Meanwhile, the crew of the U-505 was sitting down to lunch when their sonar picked up propeller sounds overhead. Oberleutnant zur See Harald Lange, the captain of the U-505, ordered the boat to periscope depth to investigate. To his shock, he saw three destroyer escorts and an escort carrier. 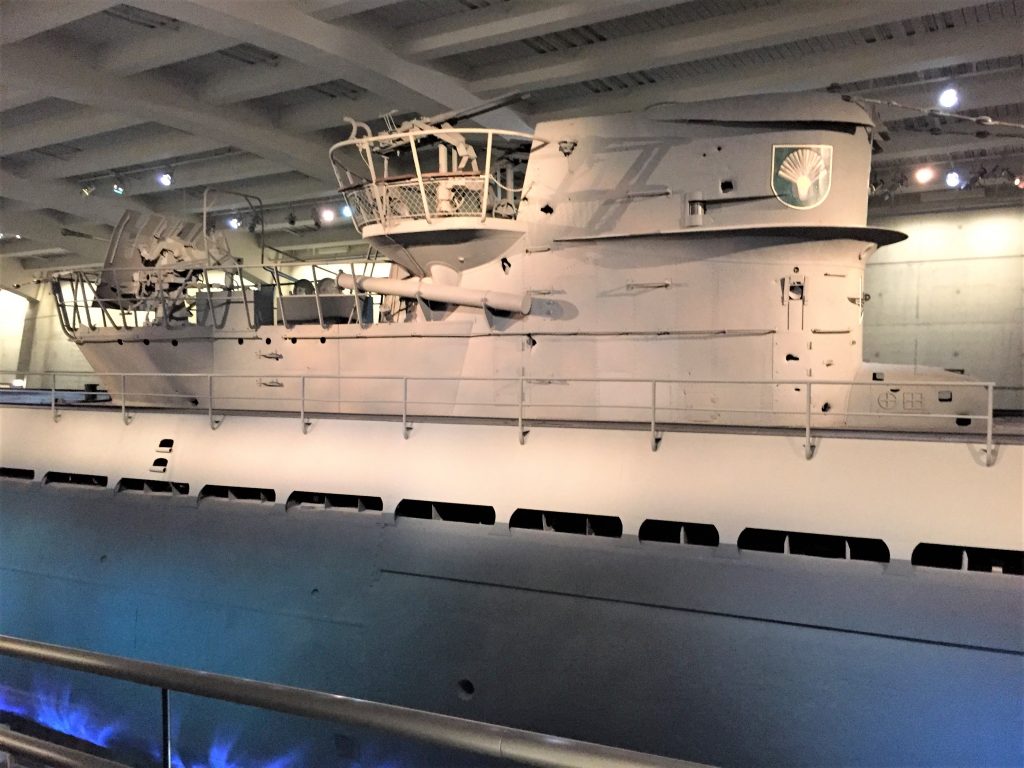 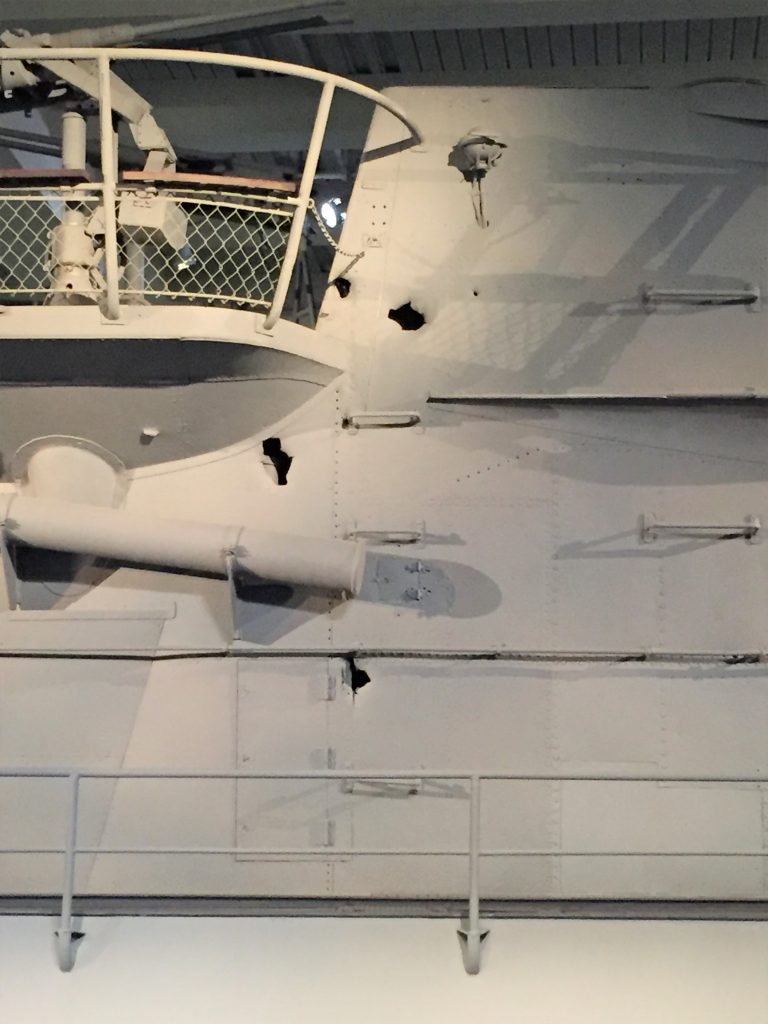 Damage to the conning tower of U-505, Chicago Museum of Science and Industry (Photo: Sarah Sundin, September 2016)

Immediately, Lange ordered the sub to dive, but it was too late. Wildcats overhead directed machine-gun fire at the diving sub to mark the position, and the Chatelain threw a salvo of “Hedgehog” depth charges. They found their mark.

The U-505 began flooding and her rudder jammed, causing her to circle. After firing a single torpedo, which did no damage, Lange realized the U-boat was doomed, and he chose to save his crew. He ordered the boat to surface and the crew to abandon and to scuttle the sub. 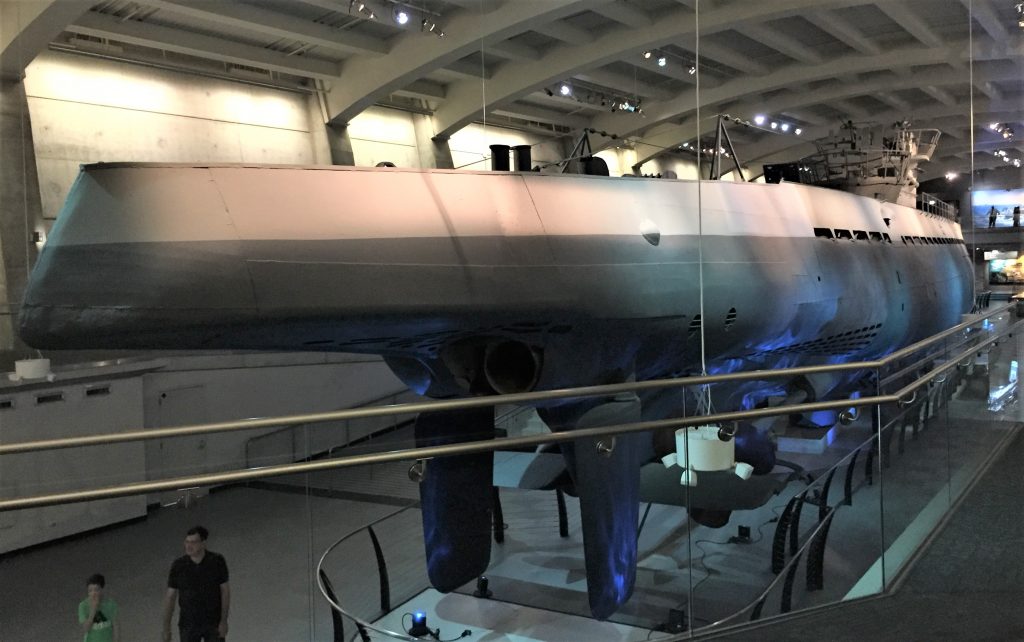 Stern of U-505, Chicago Museum of Science and Industry (Photo: Sarah Sundin, September 2016) 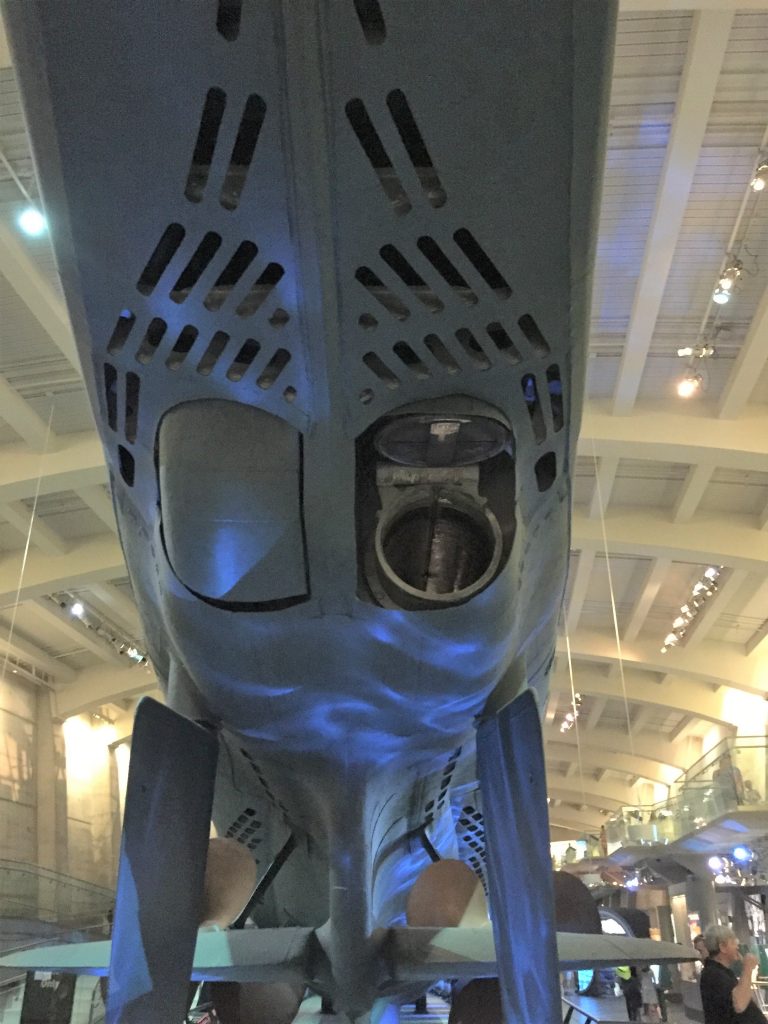 Following Gallery’s orders, the US ships and aircraft did not attempt to sink the surfaced sub but fired smaller caliber weaponry to encourage the Germans to continue to abandon ship. The submariners poured out of the hatch. Several were wounded, including Lange, but only one crewman was killed. The battle was over quickly. At 1127, the Americans ceased firing and picked up the 58 survivors. 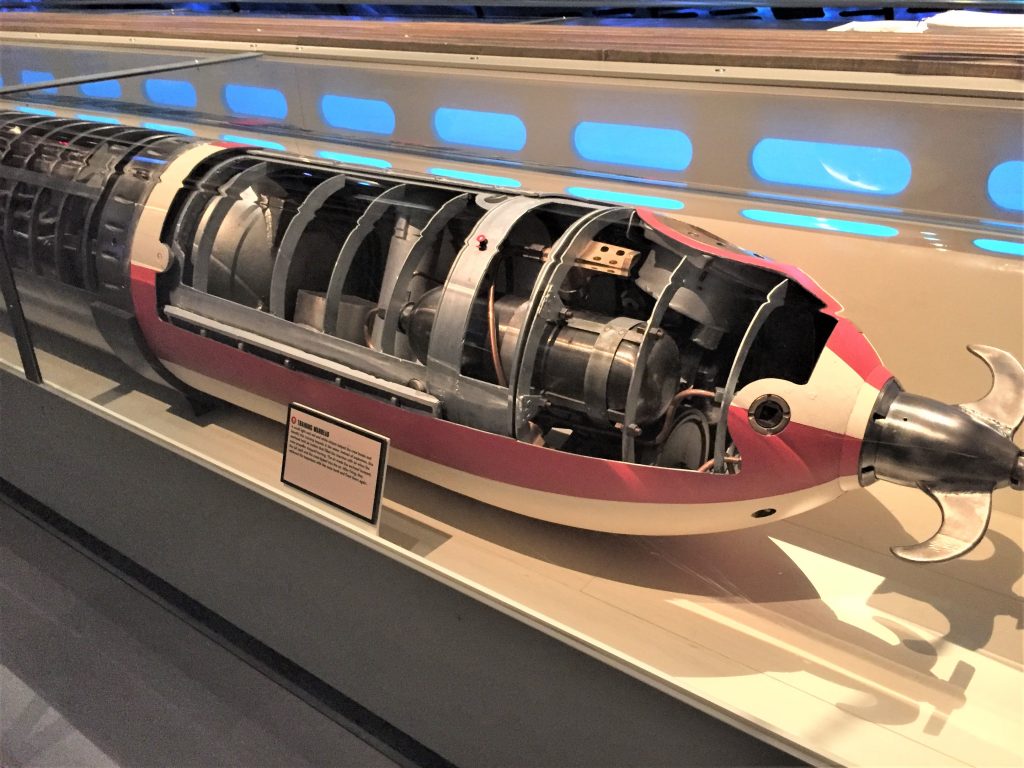 But the story was only beginning. Read the rest of the story here! And see pictures from inside the U-505!