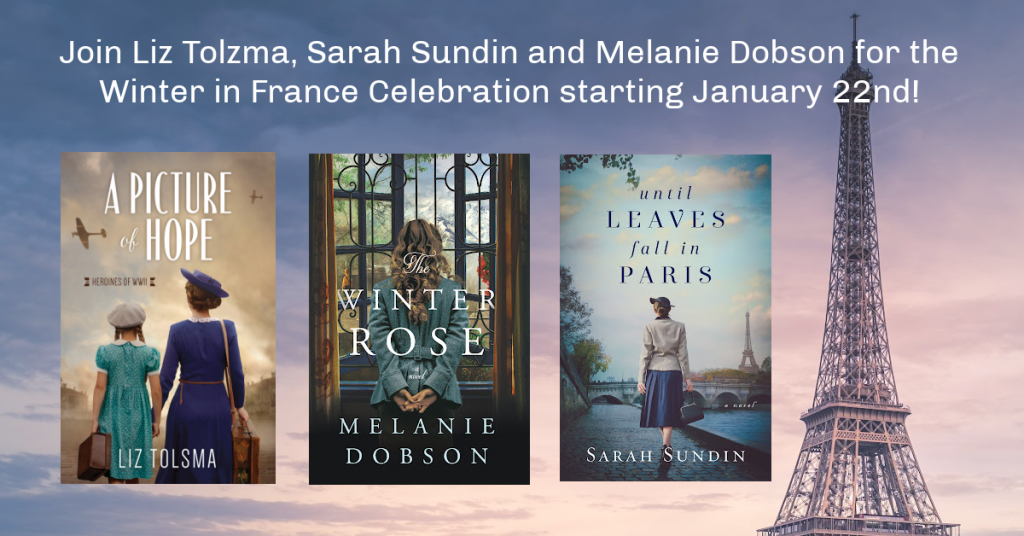 Bonjour! We may not be able to travel to France this year, but we’d like to invite you to journey across France with us through our World War II novels. I’m teaming up with Melanie Dobson and Liz Tolsma (two of my favorite authors!) for the Winter in France Giveaway from January 22-29, 2022!

We’re kicking off today, January 22, with a Facebook Live event on Liz Tolsma’s page at 10 am PST/1 pm EST. We’ll share some of our stories behind our books and answer questions. The video will be available for viewing afterward.

During the week of January 22-29, readers can take a tour of our blogs about France (see my article below!).

Here’s more about our books: 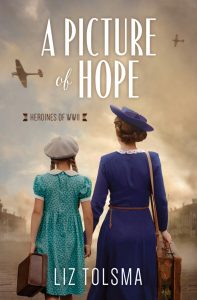 A Photojournalist Risks Her Life to Save a Very Special Child

Journalist Nellie Wilkerson has spent the bulk of the war in London, photographing mothers standing in milk lines—and she’s bored. She jumps at the chance to go to France, where the Allied forces recently landed. There she enlists Jean-Paul Breslau of the French underground to take her to the frontlines. On the journey, they stumble upon a great tragedy, leaving a girl with special needs being orphaned.

Can Nellie and Jean-Paul see the child to a safe haven while being pursued by the Nazis, who are pressed by the advancing Allies and determined to destroy all they can before they flee? 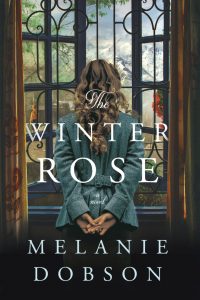 In this gripping WWII time-slip novel from the author whose books have been called “propulsive” and a “must-read” (Publishers Weekly), Grace Tonquin is an American Quaker who works tirelessly in Vichy France to rescue Jewish children from the Nazis. After crossing the treacherous Pyrénées, Grace returns home to Oregon with a brother and sister whose parents were lost during the war. Though Grace and her husband love Élias and Marguerite as their own, echoes of Grace’s past and trauma from the Holocaust tear the Tonquin family apart.

More than 50 years after they disappear, Addie Hoult arrives at Tonquin Lake, hoping to find the Tonquin family. For Addie, the mystery is a matter of life and death for her beloved mentor Charlie, who is battling a genetic disease. Though Charlie refuses to discuss his ties to the elusive Tonquins, finding them is the only way to save his life and mend the wounds from his broken past. 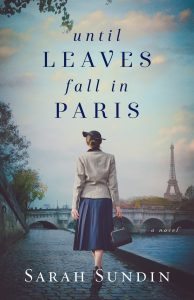 The City of Lights is renowned for its beauty and charm, and for food, fashion, and art. During World War II, Nazi-occupied Paris was blacked out, food was scarce and rationed, and fashions were altered. When I was researching wartime Paris for Until Leaves Fall in Paris, I was struck by the difficult conditions people endured – but also how they followed “Système D” – système de débrouillage – the system of getting by. Parisians found ways to bring color into their darkened world – and even thumb their noses at the German occupiers. 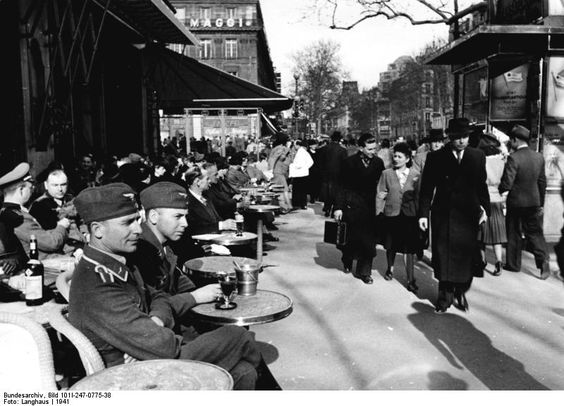 What would Paris be without fine food? Even before the German invasion, the French government instituted food rationing. After the Germans occupied Paris, rationing intensified. Most staples were rationed – meat and fish, milk and cheese, eggs, coffee, sugar, butter and oils, bread, and wine. To obtain your ration meant standing in long lines at the bakery, the butcher, the creamery, the greengrocer – and more. If the store actually had foods in stock.

Ration coupons were issued according to age, with extra rations for those in agricultural work or manual labor. Still, the average adult received rations providing only 1200 calories per day. The average Parisian lost 4-8 kg during the war, and malnutrition and anemia were rampant.

To get by, Parisians visited the country, where food was less scarce, or they bought on the black market. For the wealthy, eating at pricey restaurants provided an escape. Ersatz coffee made from barley or chicory provided an imperfect alternative.

Winter in Paris during World War II was cold. The winter of 1940-41 was one of the coldest on record in France, and snow fell in Paris in December 1941, leading to sledding down hills.

French citizens received little to no coal or heating oil. The supply of electricity was erratic, and cooking gas was often provided only during meal preparation times. Families often slept in the kitchen for warmth and kept overcoats on inside. 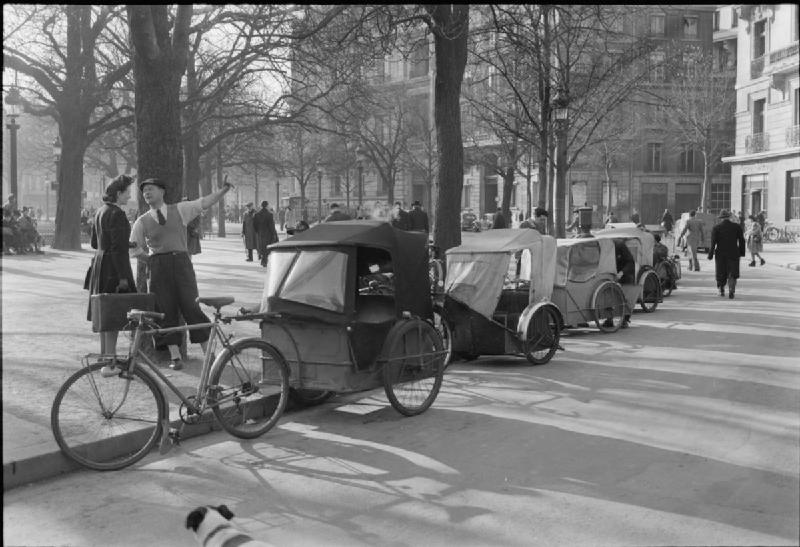 Most tourists to Paris love to visit the Arc de Triomphe and watch the cars and taxis hurtling around the roundabout with much honking of horns. During the war, the streets of Paris were all but silent.

Late-model automobiles were requisitioned, and driving permits were issued only to Germans, French physicians, midwives, firemen – and some influential collaborators (called collabos by the French).

Most people got around by foot or bicycle. The Métro ran, but stops were often closed, and sometimes the system shut down due to lack of electricity, especially later in the war. Bicycle-driven vélo-taxis and horse-drawn carriages helped people get around. 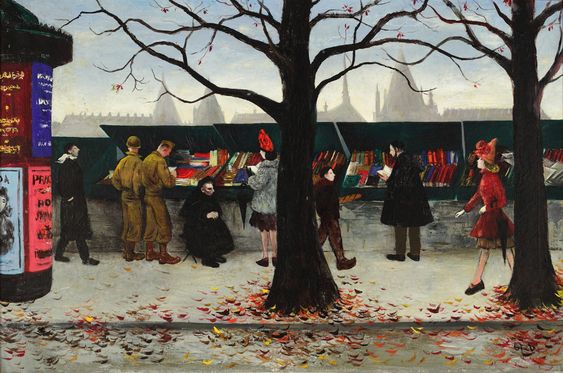 “Paris Book Stalls on the Left Bank,” showing US soldiers after the liberation of Paris – and Parisiennes in bright fashions, by Army Artist Gladys Rockmore Davis (US Army Center of Military History)

The fashion houses of Paris continued to produce beautiful couture garments – many of which were sent to Germany.

But the average Parisienne had to get by. Wool, silk, and leather were all shipped to Germany, so most garments were made of rayon or fibranne – or made from old garments or blankets. Since leather shoes weren’t available, women wore platform shoes with thick soles of wood or cork, which wore down over time.

Fashion was one way the women of Paris thumbed their noses at the Germans. Hats and turbans in vibrant shades and outrageous styles allowed women to show their individual style. Although trousers were outlawed in France, women wore them anyway or chose culottes that looked like skirts. Women wore their skirts shorter and fuller than in other areas of the world, partly to help in riding their bicycles – and partly to scandalize the Germans.

Despite these everyday difficulties – and the far greater difficulties of living under the terror of Nazi occupation – the average Frenchman and Frenchwoman got by. They made do in horrific circumstances. While the City of Lights was dimmed, it never lost its charm.

100 responses to “Winter in Wartime Paris”