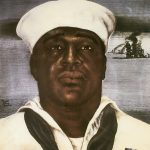 On the morning of December 7, 1941, Mess Attendant Second Class Doris “Dorie” Miller (pictured in the poster) was collecting laundry on board the USS West Virginia in Pearl Harbor. The Japanese attacked. The alarm for general quarters sounded, and Miller reported to his battle station, an antiaircraft battery amidships. It had already been destroyed…. Read more »