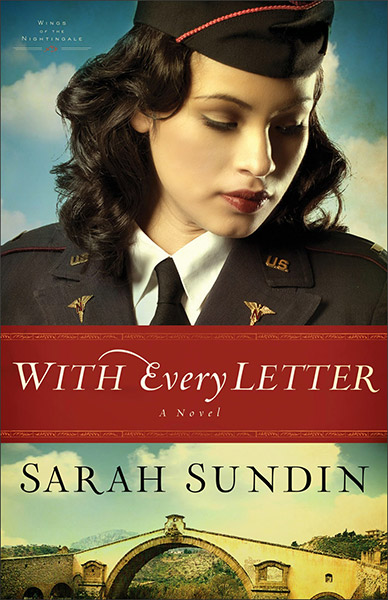 Book 1 in the Wings of the Nightingale Series. Published 2012
Book 2: On Distant Shores
Book 3: In Perfect Time

Lt. Tom MacGilliver, an officer stationed in North Africa, welcomes the idea of an anonymous correspondence—he’s been trying to escape his infamous name for years. As their letters crisscross the Atlantic, Tom and Mellie develop a unique friendship despite not knowing the other’s true identity.

When both are transferred to Algeria, the two are poised to meet face-to-face for the first time. Will they overcome their fears and reveal who they are, or will their future be held hostage by their pasts?

“Historical romance specialist Sundin opens another WWII-era series with a well-researched and absorbing tale…Sundin has such a gift for compelling scenes and details…WWII-era fans won’t be able to put it down.” ~ Publishers Weekly

Four and a Half Stars. “Sundin skillfully uses alternating point of view between Mellie and Tom and pulls readers into their lives. The themes of anonymity and growing love linking the two makes this story a romantic read.” ~ RT Book Reviews

Q: What inspired With Every Letter and the characters of Lt. Tom MacGilliver and Lt. Mellie Blake?

Poster for US Army Corps of Engineers, WWII

A: Just as Tom and Mellie’s fictional correspondence was inspired by the classic Jimmy Stewart movie The Shop Around the Corner (which inspired You’ve Got Mail), this pair of movies got me to thinking.

The concept of an anonymous correspondence appealed to me, with two people falling in love based on a meeting of minds and hearts, rather than just looks and personality. But what kind of person would be drawn to this kind of relationship?

I saw a news article about a man about to be executed for murder—he had a young son. What kind of life awaited this little boy? And what if the son of an executed murderer bore his father’s name? And what if the murder was notorious, the kind of crime that spawned “Lizzie Borden”-style rhymes? That’s how Tom MacGilliver came to be, a man who wants to escape the prison of his name.

Mellie was inspired by some absolutely adorable missionary kids who visited my Sunday school class. They’d spent most of their lives in Africa, and they didn’t speak, dress, or act like the California kids. My usual students were polite—but distant and a tad suspicious, as even wonderful children can be when confronted by anything different.

I realized these children also wouldn’t fit in with African children, and it made me sad. They, at least, had each other. But what if a cross-cultural child were an only child? What if she didn’t have the benefit of a mother to help her know how to act? What if she looked different from American kids? And wore her hair different? And had an unusual name? That’s how Philomela Blake came to be, a woman who longs for one true friendship but doesn’t know how to attain one.

Q: In With Every Letter, which places, events, and people are real—and which are fictional?

A: All places mentioned in the story are real, as is the 802nd Medical Air Evacuation Transport Squadron. The movements and activities of the 802nd are straight from the historical record, as are the issues they faced—the struggles to be allowed to go to the front, to be allowed to fly once they arrived in North Africa, and even to wear trousers—although Mellie’s role in the fight is obviously fictional. All personnel in the 802nd are fictitious with the exception of the CO, Capt. Frederick Guilford. All hospitals named are real. Any holes in my research are not from lack of trying.

Q: What was the inspiration for Tom’s dog, Sesame, in With Every Letter?

A: At the time I wrote this novel, we had a yellow lab named Daisy, who got into all sorts of trouble. My friends kept teasing me that I needed to include a dog in my next book. I did read multiple accounts of soldiers in North Africa and Italy adopting dogs. In Brave Men, Ernie Pyle described the attachment of the soldiers to their dogs as “the nearest thing to civilization in that weird foreign life of ours.”

Then I saw this article on an exhibit at the National World War II Museum about war animals. The story lauded a dog named “Smoky, found in a foxhole in New Guinea, a mascot who became a war heroine when engineers needed to run 70 feet of telegraph wire through an 8-inch culvert under an airfield. Cpl. William Wynne, who had adopted Smoky and taught her many tricks, tied one end of the wire to Smoky’s collar and had his buddies hold Smoky at one end of the culvert while he called her from the other.”

Now my hero, Tom, had an actual use for a dog. I did some research into dogs native to North Africa and settled on the Basenji breed with their high intelligence, curly tails, and speed. I kept a photo of a Basenji, Tom’s Sesame, over my desk while I wrote this novel.

Q: The book cover is beautiful! Tell me more.

The photographer, Brandon Hill, wrote a blog post about the cover shoot, including the hard work he did to get the authentic uniform. The bridge featured on the cover is the actual Ponte San Leonardo outside Termini Imerese, Sicily, that inspires Mellie at the end of the book.