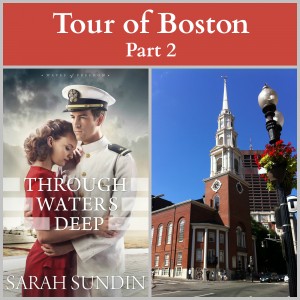 I’ve been blessed to visit Boston a number of times. In July 2014, I made a research trip and took lots of pictures to help me visualize the story. We’ll follow the Freedom Trail, established in the 1950s to connect Boston’s multiple historical sites. Follow as we visit:

Today we visit Park Street Church. When writing Through Waters Deep, I chose Park Street as the church my hero and heroine would attend, due to its long history in Boston and its role in the birth of the evangelical movement in the early 1940s. In July 2014, I was able to attend a Sunday service at Park Street and take pictures (before the service started). 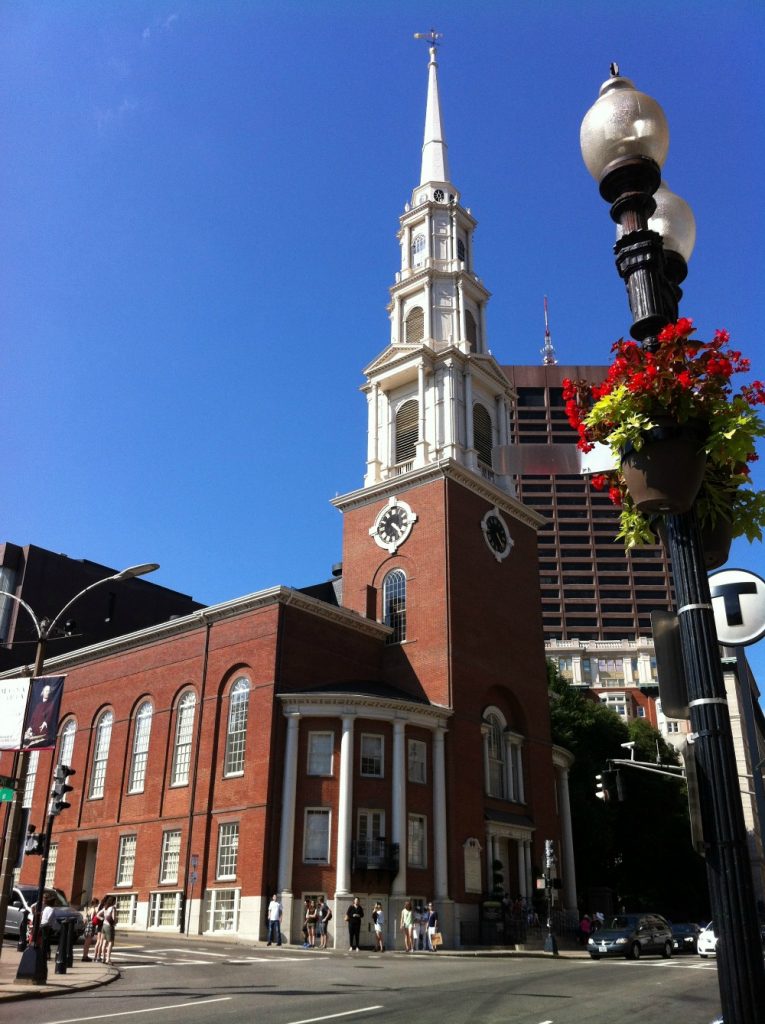 In 1809, Park Street Church was founded to support traditional Christian teachings in a time when Unitarianism was growing in strength in New England. Taking a strong stand for biblical teaching, the founders faced much opposition. From the beginning, the church believed in the cornerstones of missions, evangelism, Christian education, involvement in social issues, and biblical teaching. To this day, the church keeps the same Statement of Faith adopted in 1809. 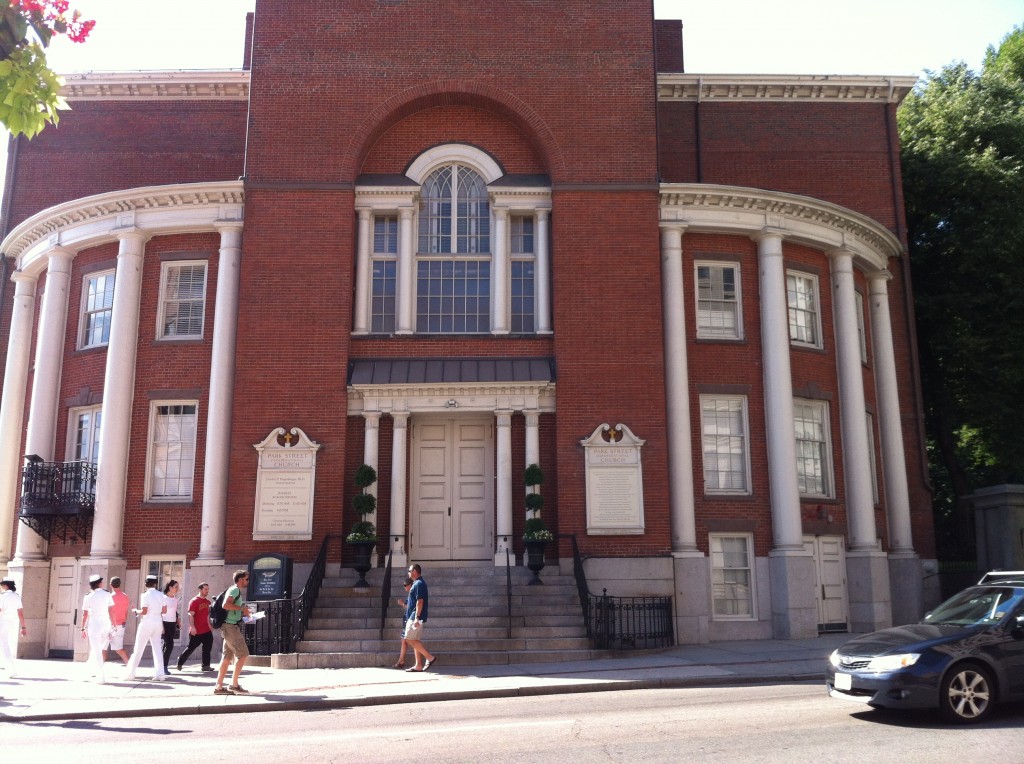 Brimstone Corner: Park Street Church, Boston (Moody Press) presents the history of this church up to 1968, showing cycles of stagnation, intense external opposition, and stirring revival—while refusing to budge from the fundamentals—an uplifting account of how God can use even one small church to have an impact on the world. 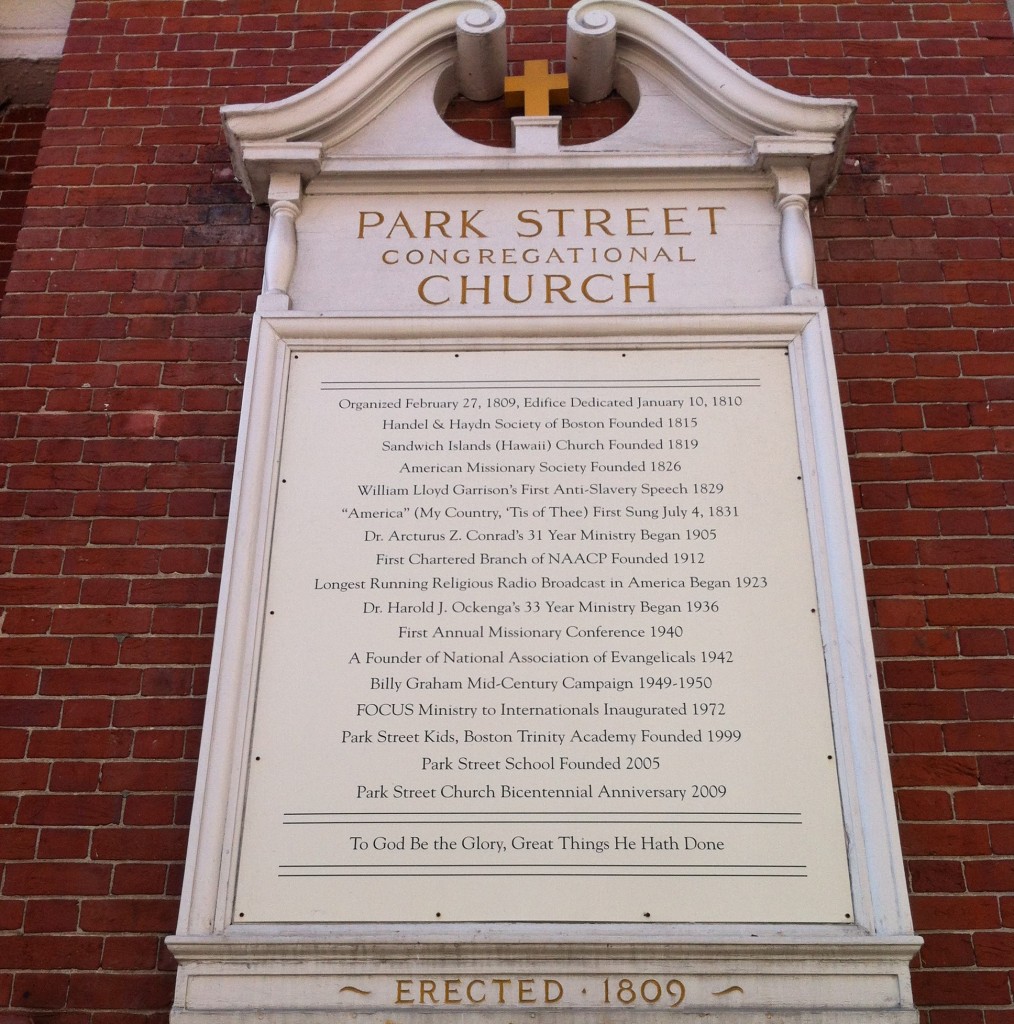 Park Street Church has a long string of historical firsts. From 1810-1867, Park Street was the tallest building in Boston, until surpassed by Church of the Covenant. In 1819, Park Street sent the first team of missionaries to the Sandwich Islands (Hawaii). In 1829, William Lloyd Garrison, founder of the American Anti-Slavery Society, gave his first abolitionist speech at Park Street. And the patriotic song America (My Country, ‘Tis of Thee) was first performed on July 4, 1831 at Park Street. 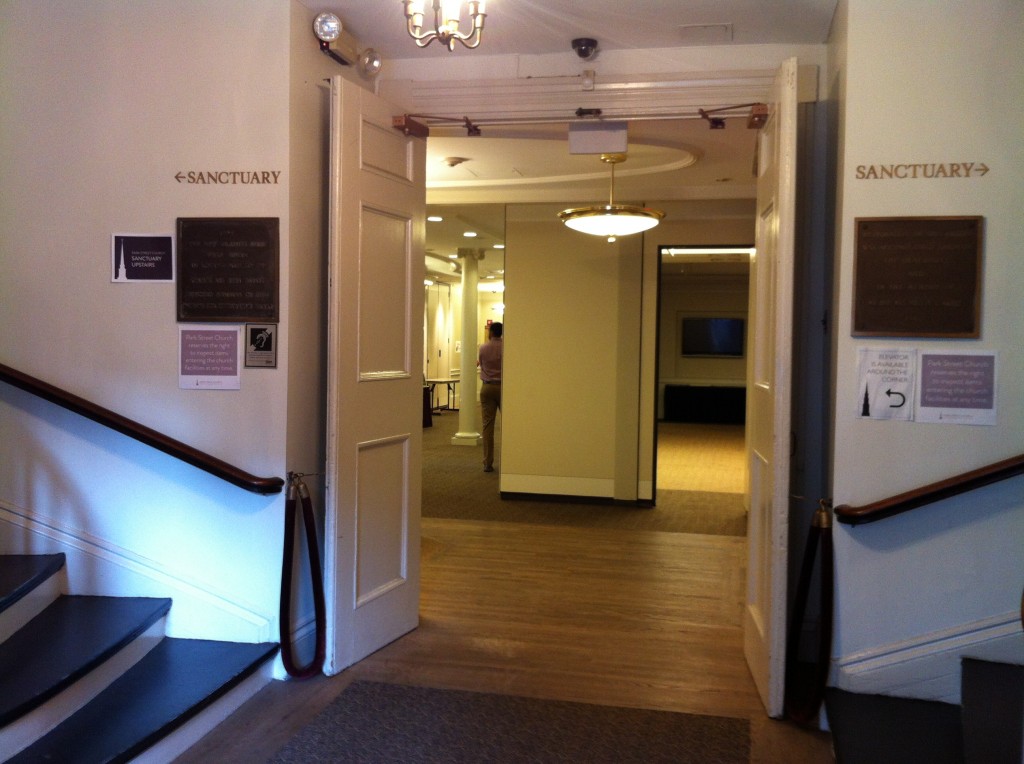 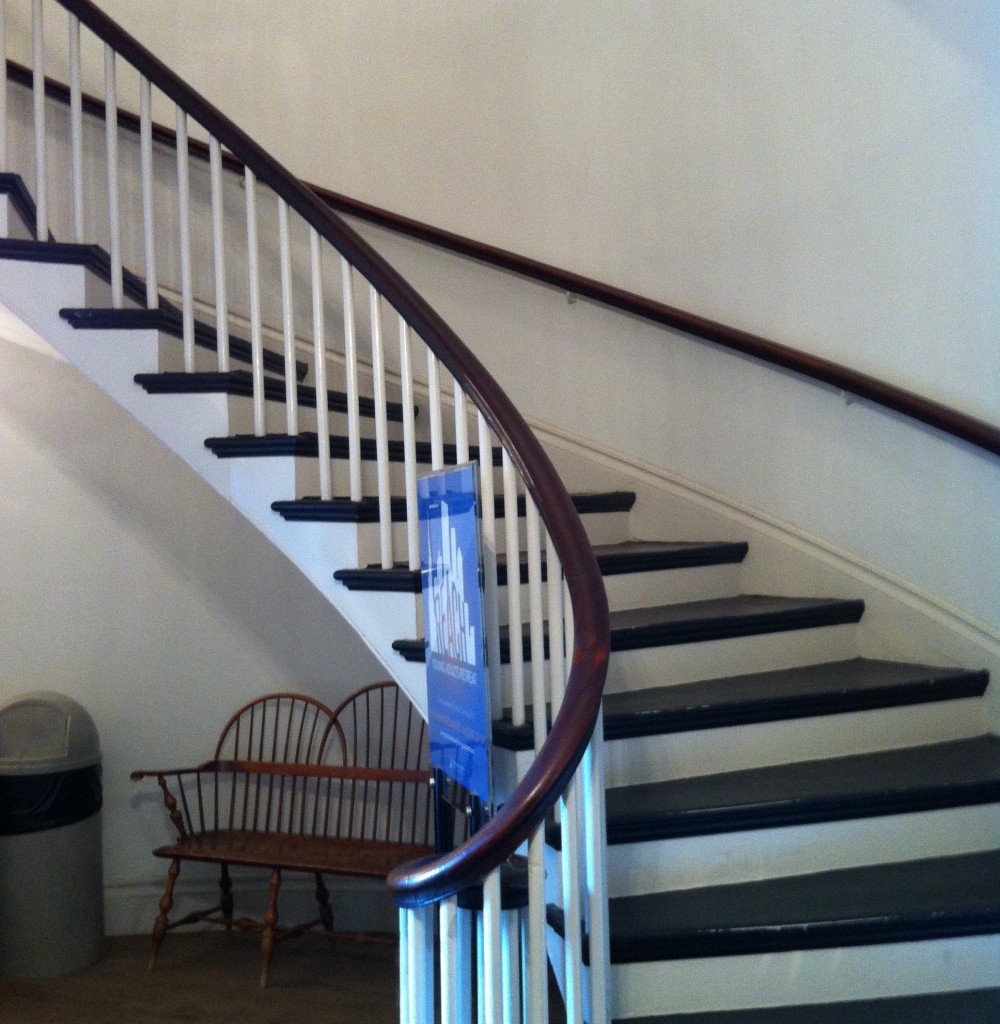 From 1936-1969, Dr. Harold J. Ockenga served as pastor of Park Street. In the first part of the twentieth century, the rise of secularism in mainline churches led to the rise of fundamentalism, with its call to separate from the culture. In response, Ockenga and others gave rise to the modern evangelical movement, which kept fundamentalism’s stand for theological truth, while rejecting its trend toward isolation from culture. In 1942, the National Association of Evangelicals was formed, with Ockenga as president. 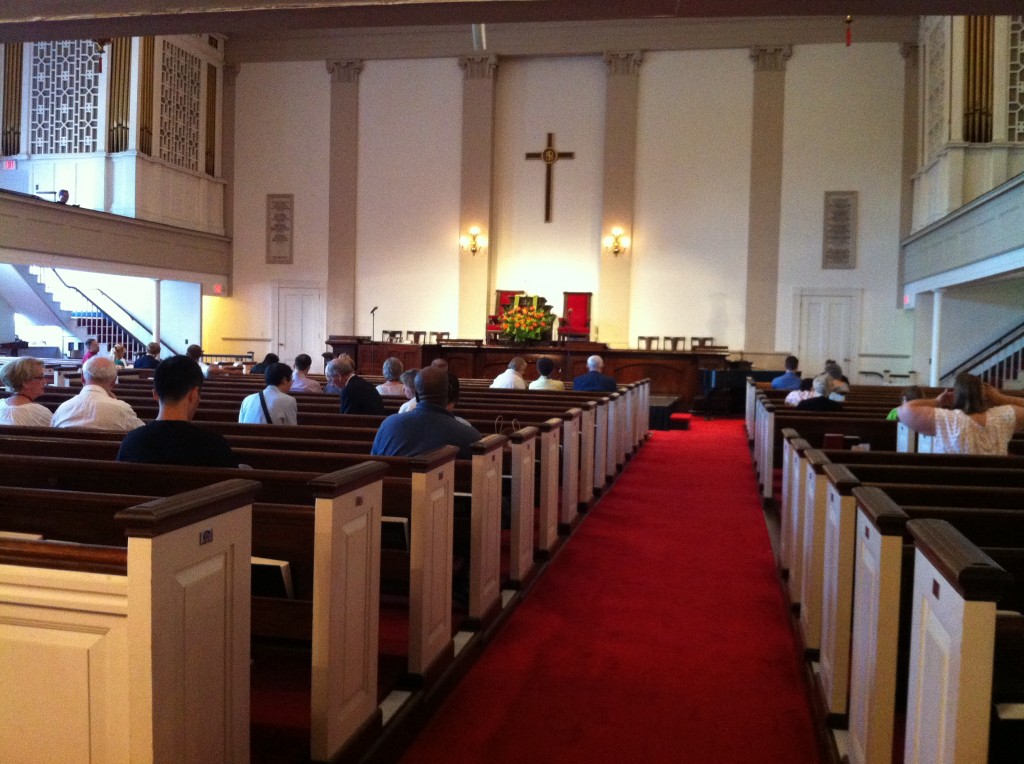 On May 30, 1943, Dr. Ockenga began an outdoor evangelical ministry on Boston Common. At the first service, 3500 servicemen and civilians enjoyed music and teaching, and many came to Christ. The services continued through that summer and the next, until opponents caused the city to cancel the permit. Not to be silenced, Ockenga continued conducting the services from the church steps, and later from the “Mayflower Pulpit” on the side of the church—across the street from Boston Common. 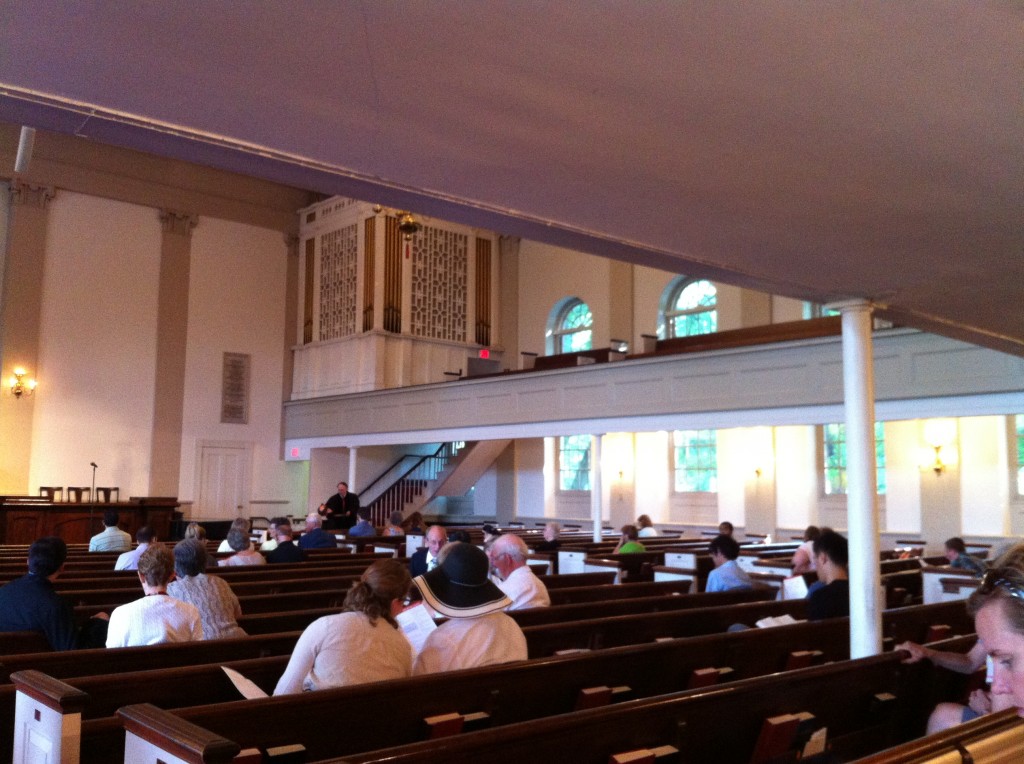 For Lent in 1944, the congregation of Park Street Church decided to forego one meal a week and to donate the money saved to a new War Relief Fund, designed to help the churches of Europe rebuild after the war. The idea swept the nation to other churches, and on Easter morning $600,000 was collected. In 1950, the War Relief Commission was renamed World Relief, which remains active to this day. In another landmark for Park Street, Billy Graham began his first transcontinental crusade at the church in 1949. 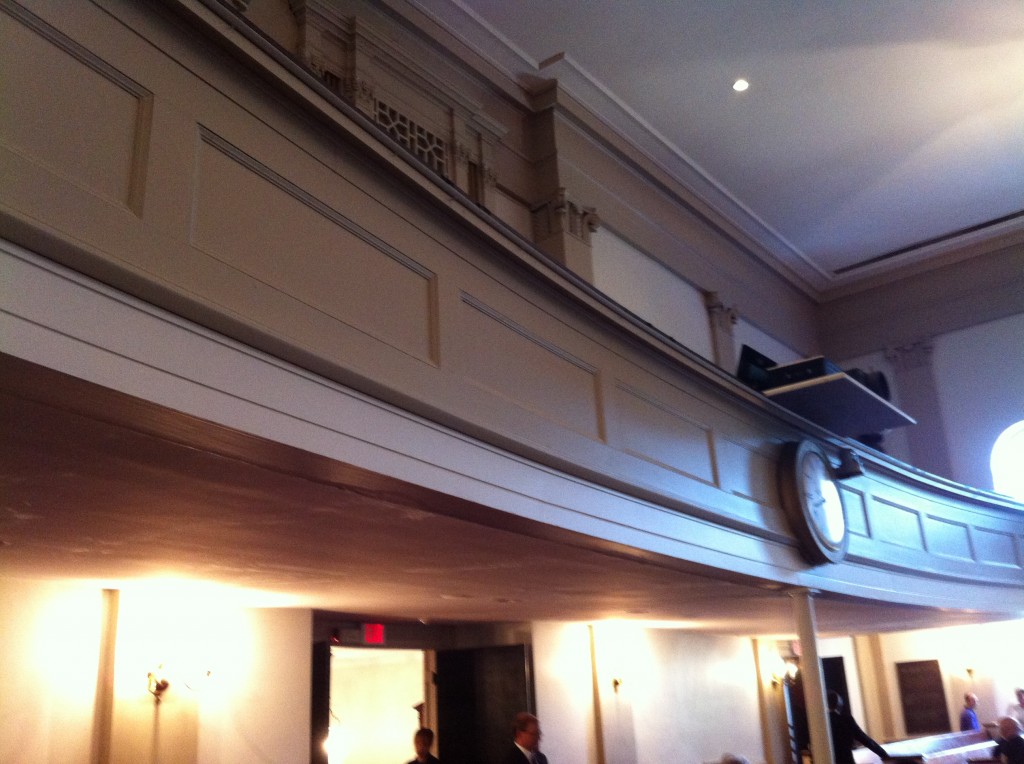 The gallery to the rear of the sanctuary, where the choir sings, Park Street Church, Boston (Photo: Sarah Sundin, July 2014)